Besides Mexico City, Lima served as an important center for early colonial publishing in Spanish South America (Virreinato de Nueva España). We know that Antonio Ricardo (originally from Turin) was the first printer in South America, and he published the first book in South America in Lima in 1584. It was entitled, “Doctrina Christiana y catecismo para instruccion de los Indios.”  Since then Lima continued to serve as an important printing center for the Viceroyalty of New Spain. We were able to acquire a few Lima related imprints for the UC Berkeley Library.  A 1668 hagiography of the first Catholic Saint in Americas St. Rosa de Lima. This will be the only physical copy for now in the United States in our understanding. 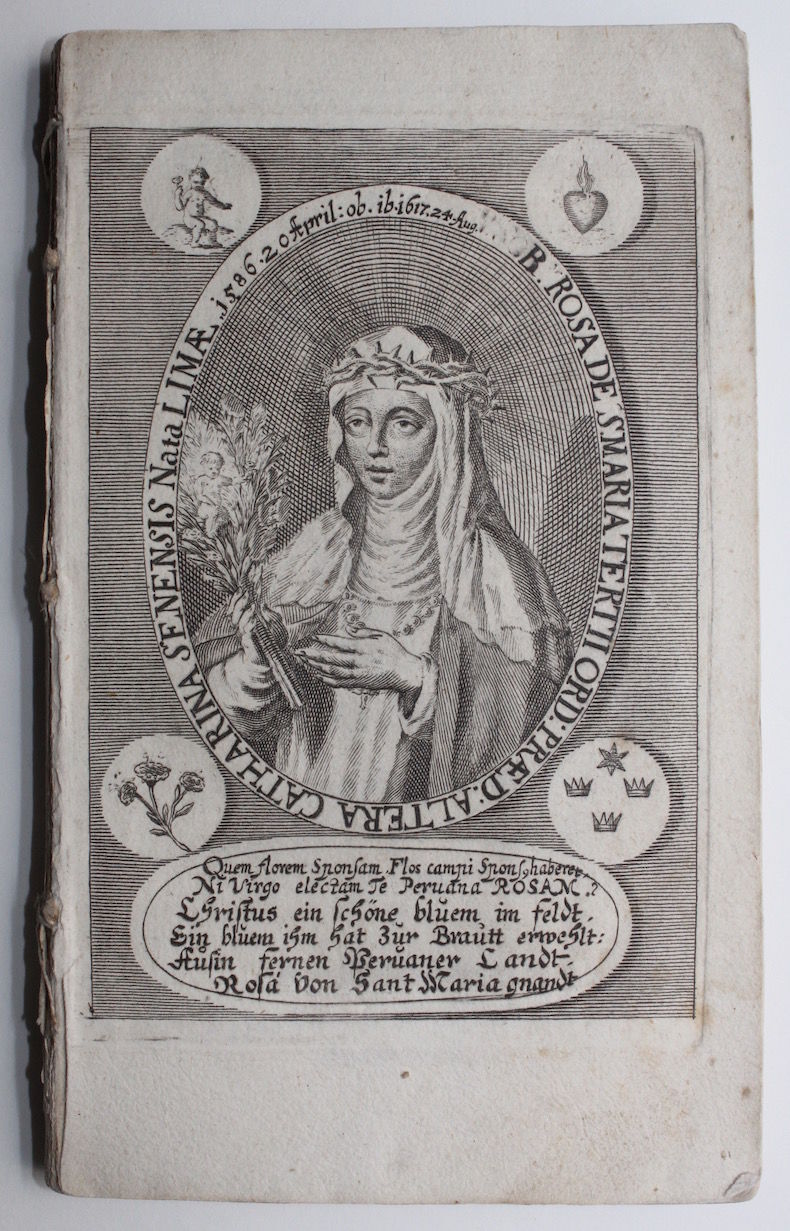 The other books that we acquired are indicated below. These will be housed in Bancroft Library for custodial reasons. I wanted to thank Bancroft Library’s staff for all their help.

Having difficulty figuring out where to start? You’ve come to the right place! If you choose to celebrate Native American Heritage Month with literature at home, the Library’s online selections are a great place to begin your exploration of Native American works.

If you enjoy fiction the most, try beginning with these popular novels:

If you’re interested in personal chronicles, look no further:

Maybe historical accounts or non-fiction works are more your cup of tea:

This is the penultimate event in the series: “Collecting Conversations: Academic Libraries and Research in Flux,” that we have organized at our library. The registration information is here: https://berkeley.zoom.us/webinar/register/WN_CSqP-OQgRpulyYCTP-26XQ

A special note of thanks to Dr. Ruth Haber, our curator for Judaica Collections, and our campus partners for their generous support and encouragement: The UCB Center for Jewish Studies; The Berkeley Institute for Jewish Law and Israel Studies; and The Magnes Collection of Jewish Art and Life. Also, the event could not have been possible if not for the help from Library Administration and the Library Communications Team. ALL ARE WELCOME! 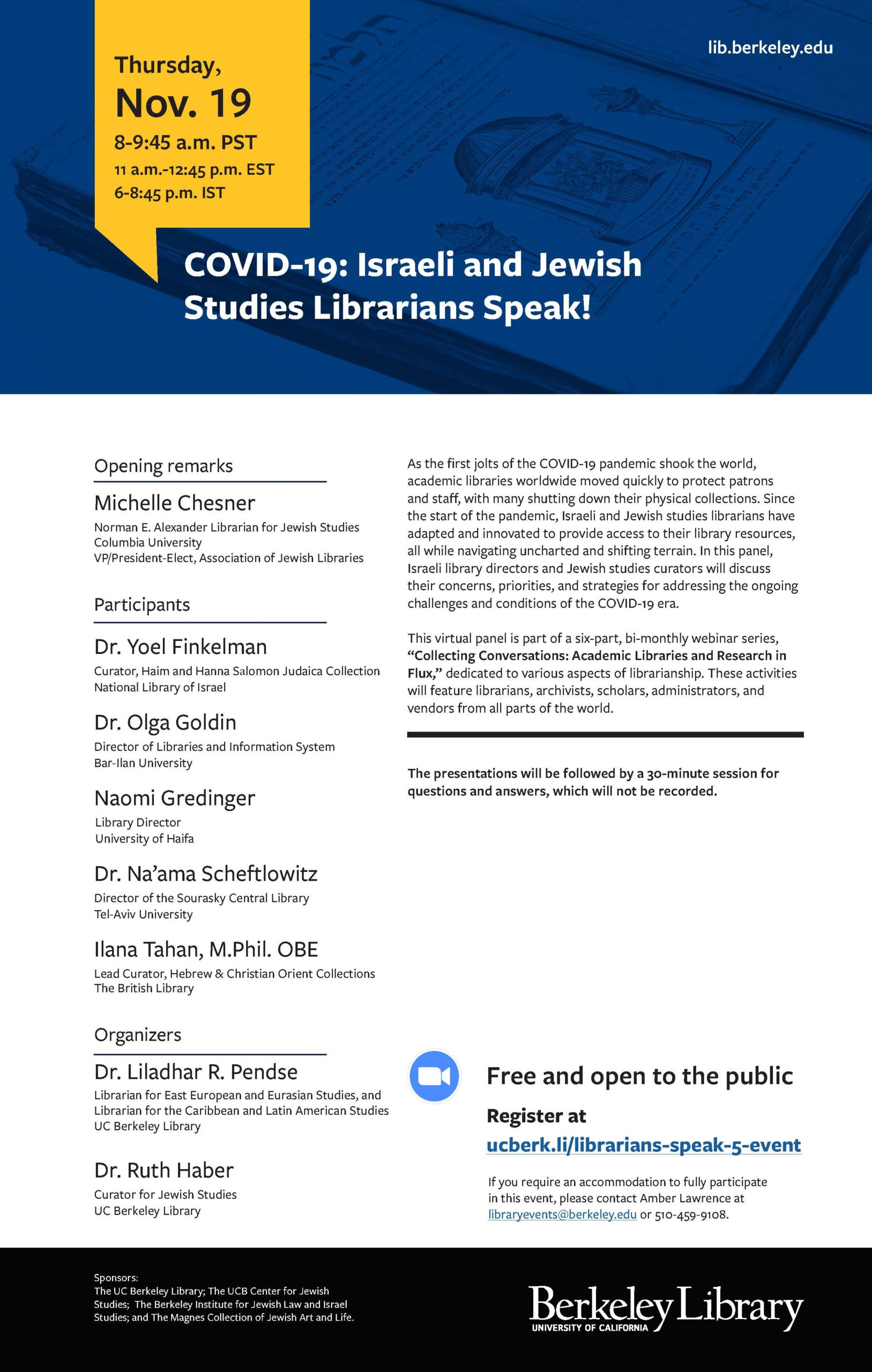 Guest high school blogger uses UC Berkeley Oral History Center interviews to write about Fear in the Medical Community in AIDS Research and Treatment. This is part two of a 3-part series. Resources for teachers are at the end of the article, including the Oral History Center’s Epidemics in History—HIV/AIDS Curriculum.

In the early years of the AIDS epidemic, no one knew what the disease was or how it was transmitted. This led to medical professionals who treated AIDS patients at San Francisco General Hospital to fear for their lives, not knowing whether they could get the disease themselves. This fear was particularly intense for gay health professionals, who were already in a high-risk group. This fear subsided for medical professionals once the HIV antibody test was developed in 1985, but in the years before that, fear plagued doctors and other health workers.

Doctors treating AIDS patients in the beginning didn’t use any protective measures when treating patients, including taking their blood for testing. Andrew Moss led the first epidemiological study of gay men with AIDS. On why health workers didn’t use gloves or other protective measures, he says, “Denial. We were refusing to acknowledge how afraid we were.” Moss went on to explain that despite the denial, the health professionals lived in fear.

Moss describes the period between 1983–1985, as “the true experience of terror.” During this time, he was working with patients, but the antibody test had not yet been developed.  The lack of knowledge on who could get it or who had it was terrifying to health workers. “It was a period of maximum paranoia. Nobody knew who was getting infected (Moss, 283).”

Paul Volberding was an oncologist who first became involved in AIDS while treating patients with Kaposi Sarcoma. He created and worked in the AIDS clinic in San Francisco General. He describes the environment in his home during this period, and how when he developed any sort of sickness or fever, he thought he had AIDS, but wasn’t allowed to discuss it.

There was about a year or year and a half period where the anxiety was so great that AIDS was just not permitted as a discussion item at home. There was so much anxiety attached to it that if I’d say, “Gee, I’m worried about taking care of these patients. I’m worried I have a fever, maybe this is PCP,” my wife, Molly, wouldn’t let me talk about it. (Volberding, 122)

After the HIV antibody test was developed in 1985, all the health workers in the AIDS ward were tested, and most came back negative, except for some of the gay employees. At this point the fear was over for people like Volberding and Moss, married heterosexual men. But the risk remained for gay health workers, and Moss recalls several coworkers who ended up dying from AIDS, and informing them of their test results.

In January 1985, I tested myself, when I had seen how the results were coming in. All the heterosexuals were negative. It was a very difficult study to do. There were a lot of gay men working in the clinic, and one-third of them were positive. And they’re dead now. Philippe Roy, the receptionist, the Shanti social worker, Gary Starliper, and a whole bunch of people that worked there are now dead. We tested them and they were positive, and I had to tell them. (Moss, 283–284)

The fear of catching AIDS in the medical community dissolved after many were tested and all came back negative except for the gay men. This also allowed doctors to assure the public that there was no risk of casual transmission from things like coughing and saliva. For medical professionals, the period of fear was for the most part over, and doctors could focus on treating and researching AIDS.

Education resources, including how-to for interviewing, tips for searching our collection, and the complete AIDS/HIV curriculum with sample assignments.

All interviews in the AIDS Epidemic in San Francisco Oral History project.

The Library has a trial to Stratford Festival Shakespeare, a new video subcollection that would supplement our existing subscription to Drama Online. The trial will run until December 3rd. If the subcollection is of interest to you, the Library wants to hear from you! Please fill out this form for feedback and any comments you have.

Study Guides for each film are also available for free and can be found on a dedicated learning resources page for the collection.

The UC Berkeley community already has access to great material through Drama Online.  Drama Online (Bloomsbury) is an online resource of primary and secondary sources for the study and performance of drama. It contains 1700 playtexts, 350 audio performances, and 150 hours of video. The platform has a web-based e-reader with page and line numbers that correspond to the print edition, download options, full text search, visualization tools including a Words and Speeches Graph and a Character Grid for each play, the ability to view lines for one specific character, genre, period, title, or playwright browsing, and annotation tools.

I was shocked by the news of the untimely demise of Mexican author Luiz Zapata, who is considered a trailblazer of the LGBT literary genre in Mexico. As the newspaper, Millenio reported he had been sick for sometime. Luis Zapata Quiroz‘s acclaimed book, “El vampiro de la colonia Roma,” is considered one of the first books that broke the silence on the issues of gay presence in Mexican literature. It was the recipient of the 1979 Juan Grijalbo book prize.

I leave you with some of his books that we have in our collections and a video recording. RIP, Luis Zapata.

Although we don’t always think of it that way, one federal government program that affects each of us in the United State is the decennial census.  And among the challenges of many kinds that a pandemic has brought us, its effects on gathering good quality census data is high on the list.

Earlier this year, the Library hosted a well-attended (physical) exhibit related to the census, Power and the People: The US Census and Who Counts (which can still be experienced online).  Related to the exhibit, we were on board with our plan to host a panel of campus experts on the contested race and ethnicity questions in the census, and how they’ve shifted over time…. Until March 17, when the Bay Area went into a shelter-in-place order and the program had to be postponed.  But last month, thanks to a persistent team, generous panelists, and the wonders of Zoom, we were thrilled to able to present the panel at last, online!

Professor Mora started the program off with the information that “ethnic and race categories are political constructs… They are not set-in-stone scientific markers of identity or genetic composition.” She noted that since the census counts are directly related to funding, communities have a vested interest in getting accurate and complete counts, but this can be very difficult for groups and areas that are designated Hard to Count. Professor Sacks continued by emphasizing the ways in which census-driven funding allocations can affect people in poverty and those in social safety net programs.  She also noted the intersections shown by census data between race and place, such as areas with a substantial number of incarcerated people. Finally Professor Robinson added background and context by discussing the site racebox.org, which shows the history of the race questions on the census from 1790 onwards, and which illuminates the changes in the cultural and social conceptions of what race is and how it can be measured.

The program concluded with an animated question and answer period, which included Professor Mora’s elaborating on the differences between racial and ethnic categories, Professor Sacks (who has actually been a census enumerator) discussing the challenges of counting the homeless population, and Professor Robinson revisiting the question of incarceration and the Attica problem: “[Incarcerated people’s] residence is considered to be a prison. That’s not their home, and the relationship then to the power…in the communities that they [aren’t from], that’s the Attica problem.”

Of course, this summary doesn’t do justice to the range and depth of the issues discussed.  If you missed this program, or would like to see it again, check it out on the UC Berkeley Library’s YouTube channel!

This training will help you navigate the copyright, fair use, and usage rights of including third-party content in your digital project. Whether you seek to embed video from other sources for analysis, post material you scanned from a visit to the archives, add images, upload documents, or more, understanding the basics of copyright and discovering a workflow for answering copyright-related digital scholarship questions will make you more confident in your publication. We will also provide an overview of your intellectual property rights as a creator and ways to license your own work. Register at bit.ly/dp-berk

Upcoming Workshops in this Series 2020: