Until July 10th, the Library has access to three portals of ebooks published by Librairie Droz.

Textes Littéraires Français
Eugénie Droz founded the Textes Littéraires Français after the end of World War II, in 1945. This collection is dedicated to the critical edition of significant texts from the French literary heritage from the Middle Ages to the twentieth century. The texts are available in a small, handy format, and each edition is accompanied by an introduction, notes, a glossary, and an index when necessary. This rigorous critical apparatus welcomes the scholarship of the best specialists to shed light on the creation of these works, and, no matter their time period, to provide modern readers with the most meticulous explanations on their historical, cultural, and linguistic contexts. For seventy years, the collection has welcomed, in addition to some smaller works, more than 600 monuments of French literature.

Humanisme et Renaissance
Founded by Eugénie Droz in 1950, the collection Travaux d’Humanisme et Renaissance has brought together more than 550 titles in sixty-five years. It is the most important collection of sources and studies on Humanism (Politien, Ficin, Erasmus, Budé…), the French Reformation (Lefèvre d’Etaples, Calvin, Farel, Beza…), the Renaissance (literary and artistic, Hieronymus Bosch or Rabelais, Ronsard or Primaticcio), as well as the medicine, science, philosophy, book history, and all forms of knowledge and human activity from the long sixteenth century, roughly from 1450 to the death of Henry IV, the threshold of the classical age.

Calvin
This portal presents all the texts by or about John Calvin which have been published by the Librairie Droz from 1960 to 2012, with an initial focus on Geneva, Calvin, and the beginnings of the French evangelical movement with Lefèvre d’Etaples and Marguerite de Navarre.

There are tutorials available to help you take advantage of these resources:

Your feedback on this resource is greatly appreciated. Please contact dorner@berkeley.edu.

The Library has acquired the online Dictionary of Medieval Latin for British Sources, the first to focus on British Medieval Latin and based on the close reading of thousands of mainly Latin texts written in Great Britain from 540 to 1600 A.D.  Authors included were British, lived in Britain, or writings of British authors living abroad.  It also includes texts from territories under the administration of the the English Crown.

The online version is an addition to the Database of Latin Dictionaries (DLB) to which the Library already subscribes.  A print version of the Dictionary resides in our library in the Doe Reference Dictionaries collection at PA2891 .L281. 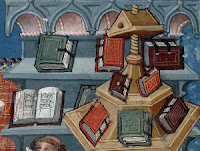 La Bibliothèque virtuelle des manuscrits médiévaux (BVMM) is a digital library of medieval manuscripts from French libraries across the country (but not the National Library) made available by the IRHT (Institut de Recherche et d’Histoire des Textes). The interface is in French but easy to use. There is a map view that allows you to browse by city.

Manuscripts Online enables you to search a diverse body of online primary resources relating to written and early printed culture in Britain during the period 1000 to 1500. The resources include literary manuscripts, historical documents and early printed books which are located on websites owned by libraries, archives, universities and publishers.

As described at the project’s web site, Manuscripts Online has not “created any new digital content. Instead, it provides integrated access to electronic content already available on distributed websites. Our search engine does not search these resources directly. Instead, it searches indexes we have created from the full content of each resource.”

Note that some of the resources searched can only be fully accessed with a subscription. The tool will allow users to search these resources and examine snippet results free of charge but does not provide full access.

The Institute of Historical Research is offering a free online course on paleography, aimed at helping scholars interested in improving their ability to read and understand medieval documents and books. The topics covered include general palaeography, the history of medieval scripts, diplomatic, codicology and illumination.

Other free online courses from the Institute of Historical Research: http://www.history.ac.uk/research-training/browse/online