Hello and welcome to The Berkeley Remix, a podcast from the Oral History Center of The Bancroft Library at the University of California, Berkeley. Founded in 1954, the Center records and preserves the history of California, the nation, and our interconnected world.

Lately, things have been challenging and uncertain. We’re enduring an order to shelter-in-place, trying to read the news, but not too much, and prioritize self-care. Like many of you, we’re in need of some relief.

So, we’d like to provide you with some. Episodes in this series, which we’re calling “Coronavirus Relief,” may sound different from those we’ve produced in the past, that tell narrative stories drawing from our collection of oral histories. But like many of you, we at the Oral History Center are in need of a break.

We’ll be adding some new episodes in this Coronavirus Relief series with stories from the field, things that have been on our mind, interviews that have been helping us get through, and find small moments of happiness. 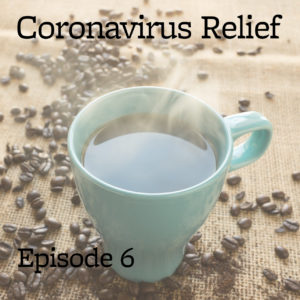 Hello, everyone! This is Amanda Tewes.

I was an avid podcast listener even before we all started sheltering in place. These days I’ve doubled down. But instead of listening on my commute, I catch up with episodes during my daily walks. And I’ve been sharing some of my favorite podcasts dealing with history, memory, and archival audio on the Oral History Center blog.

Today I’m going to tell you about a new podcast I’ve been listening to called Wind of Change, which was recently featured on the blog. You’re going to want to buckle up for this wild ride.

Many Americans haven’t even heard of the Scorpions. And if you’ve heard of them at all, it’s due to their song “Rock You Like a Hurricane.” You know the one.

But this German band that sings in English has diehard fans all over Europe and Asia. Formed in 1965 in Hanover, Germany, three of the five band members have been playing together since 1978. And they continue to tour internationally.

And what makes the song “Wind of Change” so fascinating is its resonance with the zeitgeist of 1990. The song was supposedly written after the band played in Moscow in 1989 and was released shortly after the fall of the Berlin Wall.

For many, the song represents the “change” happening across Europe that led to the collapse of the Soviet Union. But as Keefe points out, “Wind of Change” isn’t just the soundtrack to the end of the Cold War, but also a song with modern resonance. When he saw the Scorpions live in Kiev, Ukraine, alongside huge crowds, Keefe was reminded that the country was actually still at war with Russia, trying to maintain its post-Cold War independence.

For Ukranians at least, “Wind of Change” is not just nostalgia, but a sort of call to arms.

Keefe’s previous work inlcudes his 2019 book Say Nothing: The True Story of Murder and Memory in Northern Ireland, which the Oral History Center chose as its inaugural book club pick. (Make sure to check out that conversation!) In Say Nothing, Keefe explores the challenges of The Troubles in Northern Ireland, alongside the murder of Jean McConville and the Boston College Belfast Project oral histories. In Wind of Change, Keefe encounters similar challenges working with former spies as he did with former revolutionaries in Ireland: lies and obfuscation.

The delight of listening to this story in a podcast format is the ability to hear the song itself, the enthusiasm from live Scorpions audiences, archival and new interviews, and to provide some (but not enough for their taste) anonymity for former clandestine officers. But Wind of Change offers more than just great audio, it also takes the listener on a journey into how to investigate a thirty-year-old story, following oddball leads – even to a G.I. Joe convention – and invites skepticism about what information to actually believe. Indeed, the podcast also questions the nature of storytelling around this rumor and its own role in continuing the myth making around the CIA. But Keefe also wonders: how do you uncover something that (if true) was among the top CIA secrets during the Cold War? As an oral historian, I would add that these events have also been diluted by memory and time, and those who can speak to the true origins of “Wind of Change” may no longer be able to do so.

The podcast Wind of Change is not just a fun listen about a campy band and Cold War CIA operations, but also a compelling story and a great distraction. Listen to all eight episodes of Wind of Change right now on Spotify.

You’ve got the song stuck in your head now, don’t you?

Stay safe, everyone. Until next time!

Thanks for listening to The Berkeley Remix. We’ll catch up with you next time. And in the meantime, from all of us here at the Oral History Center, we wish you our best.

This episode includes music by the Scorpions and Paul Burnett.

As they do in a teeming metropolis, connections occur naturally among collections in libraries and other repositories. These linkages may involve ideas and people, whether by description (cataloging and metadata), archival arrangement, researcher access and review, or, in the case of a new exhibit at The Bancroft Library, by time-shifted serendipity.

“The Summer of Love, from the Collections of The Bancroft Library” fortuitously brings together two representative figures who, in 1967, circled each other warily, but never met.

Joan Didion’s reportage in “Slouching Towards Bethlehem” is highlighted in a timely Bancroft exhibition along with images of the hippie scene in San Francisco taken by photographer Ted Streshinsky.

One thread running through her piece (in a reproduction of her typescript essay as submitted for later book publication) is a search for the Communication Company printer and publisher Chester Anderson.

Funded by proceeds from his cult-hit novel The Butterfly Kid (1967), Anderson arrived in the Haight district of San Francisco just as the seeds for the coming “Summer of Love” were sown.  In January 1967 he purchased a state-of-the-art mimeograph machine from Gestetner “to provide quick & inexpensive printing service for the hip community.”

Among the works issued by this newest member of the Underground Press Syndicate were innumerable Diggers flyers and handbills, a chapbook by Richard Brautigan (All Watched Over By Machines of Loving Grace), revolutionary manifestos, notices for performances, the Invisible Circus, other happenings, and street level public service announcements.

In her quest, Didion describes meeting Com/Co’s co-founder, who (she writes) “says his name is Claude Hayward, but never mind that because I think of him just as The Connection.”

As she is on assignment for a mainstream publication, Didion is considered (in a Diggers phrase-du-jour) to be “a media poisoner.” The Connection urges her to dump the photographer she is with “and get out on the Street” leaving her cash (“You won’t need money”) behind.

Responding to her request to speak directly with Chester Anderson, The Connection says:  “If we decide to get in touch with you at all, we’ll get in touch with you real quick.” Although she crosses paths with The Connection again that spring in the Panhandle during an agitprop intervention by the San Francisco Mime Troupe, his passive refusal to hook her up rebuts his street-inflected nickname.

Joan Didion was unable to find the oracular man who could ostensibly help her understand “the scene,” or genius loci. Despite this missed connection with Chester Anderson, by detailing her forays into the Haight-Ashbury and other hippie enclaves around San Francisco, Didion captured in prose a time in violent flux. “Slouching” became the title essay of her celebrated first book of non-fiction, securing her reputation as a caustic and insightful social seismograph.

Today their works are co-located in Bancroft’s Summer of Love retrospective: two radically different writers can be seen in a long-delayed meeting that eluded them in real life. 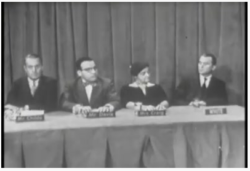 Explore over 1500 hours of streaming media footage from Meet the Press, from its premiere in 1947 to 2013. Search the collection or browse by timeline, subject, people, places discussed, historical events, or organizations.

Transcriptions accompany the episodes and close-captioning is available. Links and embed codes allow you to easily include content within bCourses and a clipping feature is available if you create a (free) account on the site. 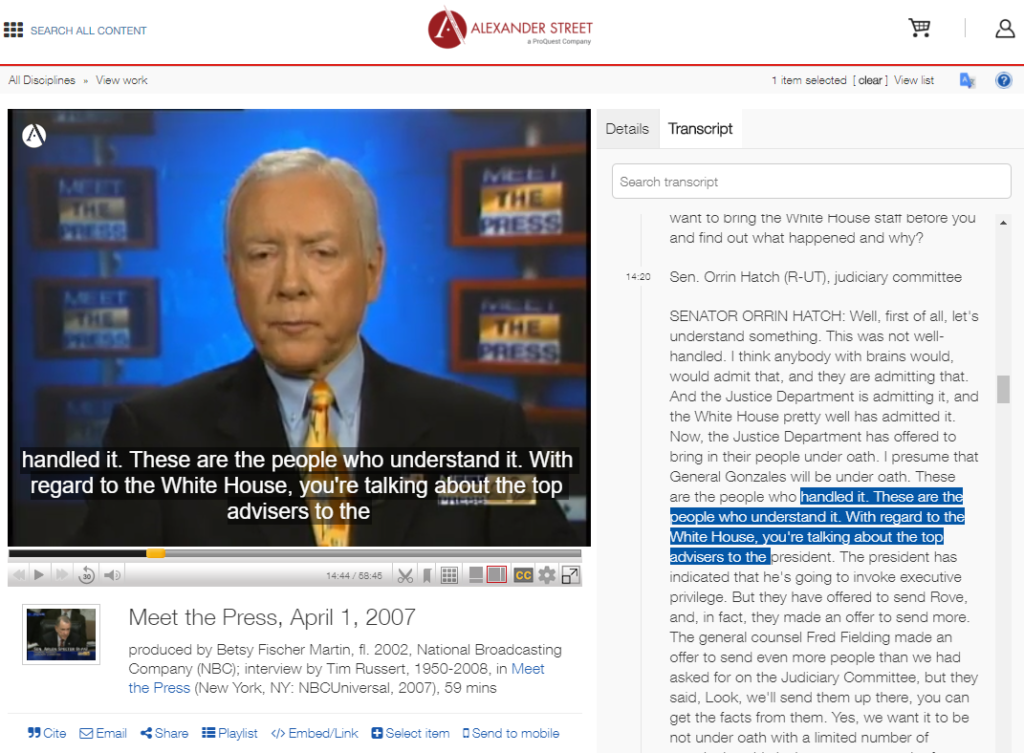