What I’m Listening To: Presidential Podcast

Chances are that if you remember anything about William Henry Harrison, the ninth President of the United States, it’s that he did not wear a coat to his inauguration on a bitterly cold day in 1841, caught pneumonia, and died a month into office, making his presidency the shortest in American history.  Unfortunately, this memorable story about Harrison’s brief presidency is not true. His March 1841 inauguration day was not that cold, and modern physicians think that typhoid fever–thanks to a contaminated White House water supply–was the real culprit in laying Harrison low. So why have Americans perpetuated this myth about Harrison?  This is just one of the many questions posed by Lillian Cunningham on the Presidential podcast, which she hosts.

Cunningham began Presidential, a forty-four episode (one for each president) podcast series, during the run-up to the 2016 presidential election, which critics felt was historically divisive, even during primary races. Drawing from her experiences writing about leadership for the Washington Post, Cunningham took a different approach to the election.  She uses Presidential to explore each American president as a way to understand which character traits and historical circumstances made for effective leadership.  In short, how do we define a successful presidency and why?

The series is a fresh take on not only American history, but also on modern American politics.  Cunningham creates memorable narratives about each leader, humanizing even the “forgotten presidents.”  In examining each president’s personality, she also asks guest historians what listeners would have been able to expect on a blind date with these men (pro tip: don’t let your friends set you up with James K. Polk!).  This informative and witty approach makes Presidential a not-so-guilty pleasure.

Listening to this podcast two years after it aired is an odd experience.  In many ways, Presidential captured the spirit of the 2016 election, but it is also a good reminder that no political outcome is inevitable.  William Henry Harrison certainly did not foresee the untimely end to his month-long presidency.

As an oral historian, Presidential has me wondering: when do contemporary politics become history?  This podcast has made me more aware than ever how, as an interviewer, I help shape narratives about the past. I will be thinking about my impact on oral history, from which questions I ask to how I ask them, as I conduct my interviews in the future. 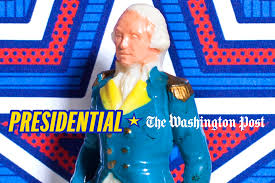