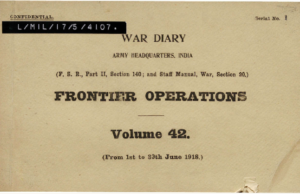 The Library has recently acquired Indian Army and Colonial Warfare on the Frontiers of India, 1914-1920, part of the India Office Records held by the British Library (IOR/L/MIL/17/5/4115).

For generations of British and Indian Officers and men, the North-West Frontier was the scene of repeated skirmishes and major campaigns against the trans-border Pathan tribes who inhabited the mountainous no-man’s land between India and Afghanistan. This collection contains Army Lists; Orders; Instructions; Regulations; Acts; Manuals; Strength Returns; Orders of Battle; Administration Summaries; organization, commissions, committees, reports, maneuvers; departments of the Indian Army; and regimental narratives. 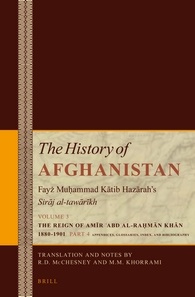 The Library has recently required an online version of The History of Afghanistan (Sirāj al-tawārīkh) written by the scribe Fayz Muhammed Kahn (also known as Katib), who was commissioned by the Afghan prince, later amir, Habib Allah Khan. It covers the period between 1747 when the country emerged as an independent political entity until 1919. The work was translated and edited by R.D. McChesney and M.M. Khorrami.