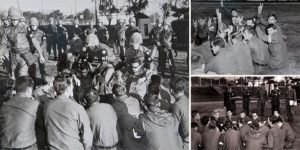 This Tuesday—August 16, 2016—please join us along with Voice of Witness for an evening of oral history and human rights. OHC interviewer, Shanna Farrell, will moderate a lively discussion between Voice of Witness editors, Peter Orner (Underground America: Narratives of Undocumented Lives) and Robin Levi (Inside this Place, Not of it: Narratives from Women’s Prisons) on the intersections of oral history methods, access, and social justice.

The event will begin at 6pm in the MLK Student Union’s Tilden Room (5th Floor). Light refreshments will be served and Voice of Witness books will be available for purchase.

This event is sponsored by OHC’s Advanced Oral History Summer Institute, which brings together students, faculty and scholars from across the United States for an intensive week of study and discussion. For more details, see the Oral History Center website.