My memories of Tuesday, September 11, 2001 are vivid. I was sitting in my second period senior English class when my teacher, who was known for his sarcasm, delivered the news.

“Hi, everyone,” he said. “I just heard that a plane hit the World Trade Center.” The class began to laugh awkwardly.

“No,” he said. “I’m serious. I don’t have any more information than that.”

When the bell rang, I walked down the hall to my current events class, where our teacher routinely had a TV playing in the back of the room so he could watch the news while he taught. That’s where I first saw the images of the plane crash. Of the burning buildings. Of people falling through the sky. Of endless smoke. Of the clear blue sky. That’s when I realized I needed to call my mother, immediately. The tragedy was now real to me.

Despite the fact that my family’s residence at the time was in upstate New York, in a small mill town built on the banks of the Hudson River that hugged the Vermont border, my mother worked in New York City. She was in educational sales and her territory covered all five boroughs. She often had appointments at Stuyvesant High School, a building that is just blocks away from the World Trade Center. I knew this because even though my birth certificate indicates something different, I was partially raised in the city. My mom would often point out Stuyvesant High School when we would drive down the West Side Highway or walk around TriBeca or buy tickets for Broadway shows in the atrium of the World Trade Center. That morning, she was on her way there.

As soon as I reached the main office of my school, I pleaded with the administrative staff to let me use the phone to call my mother.

“My mom is there. My mom is there,” I repeated. I remember the horror wash over their faces, how one of them picked up the phone and instantly dialed “9” to get me an outside line. Since my mother spent so much time in her car, she had a hard-wired cell phone, cord and all. I punched in her number, but all I got was a busy signal. I did this over and over with the same results. I called my dad and the first thing he said to me was, “I can’t reach her either.” He promised to call me as soon as he heard from my mother. I hung up the phone and turned to see a few others in line behind me waiting their turn to call family or friends who also lived in the city. I didn’t know what else to do but return to class and watch the news on loop.

I’d felt fear watching major events unfold in the past, like six years earlier when a terrorist blew up a truck bomb in front of the Alfred P. Murrah Federal Building in Oklahoma City, Oklahoma. That had scared me. But this fear, the type I felt while waiting to find out if my mother was alive or dead, was something entirely different. It was panicked and unrelenting. Time seemed to stand still. I could have moved from room to room or stayed in the same seat. (I do, however, remember relocating to the cafeteria at some point where TVs had been wheeled in so we could watch the media coverage.) And then I heard my name over the PA system. I had a phone call and needed to report to the office.

“She’s okay,” my dad said. “She called me from a payphone. She was in Brooklyn.”

In the days that followed I would learn that my mother was headed to Manhattan from Brooklyn that morning, but got stuck on the Brooklyn Queens Expressway while she was en route. Traffic moved slowly, if at all, and she ended up snaking her way to the part of the expressway that is just under the Brooklyn Heights Promenade, a place known for its iconic view of the lower Manhattan skyline. From there, she watched with hundreds of others as the towers burned and debris floated across the harbor as the wind blew southeast. She was eventually able to make it to Queens, where she pulled over and found a payphone. I would later watch her struggle with what she had seen that day, hear her plead with me not to get on a plane in the coming weeks for a college visit, listen to her talk to colleagues and discover she knew people on the plane that crashed into the Pentagon.

The trauma of the event was lasting for her, for me, and for us as a family. We visited Ground Zero many times and I have memories of the smoldering ashes fading into piles of debris and later becoming a gaping hole in the ground. I remember the photos of the missing people stapled to the fence surrounding the site. I remember the tone of the city and the feeling of community. I remember being so happy that my mother was alive, and so sad that others hadn’t been as lucky. I remember how filled with grief each anniversary of the attacks were each year. 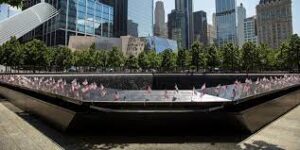 In September 2011, I was starting a master’s program in oral history at Columbia University. The Columbia Center for Oral History Research had started a massive interviewing project ten years earlier, the same day the towers fell. Interviewers–staff, student, and volunteers alike– recorded hundreds of life histories with a wide range of people who were affected by the attacks. They interviewed anyone who wanted to participate and returned to many months later to interview them again. I still consider this to be an innovative model for an oral history project, especially in a field that is constantly asking itself “how soon is too soon?” (For more on this, check out Amanda Tewes’s piece on interviewing around collective trauma.)

This project served as much of the foundation of the Columbia program and the interviews became the basis for a book, After the Fall: New Yorkers Remember September 11, 2001 and the Years that Followed, which was published as I began the Master’s program. As graduate students, we read through transcripts, listened to interviews, engaged with theory related to memory and trauma-informed narratives, learned methodology for approaching sensitive interviews, and expanded our studies into other topics, like genocide and mass-incarceration. We even watched a professor interview a paramedic who had been at Ground Zero that day, live in class, offering us the opportunity to practice our question-asking skills.

It was intense. But it made me into an interviewer who isn’t afraid to shy away from difficult topics. My training also gave me space to process my own grief around the 9/11 attacks. I found myself asking my parents more about that day and how they felt in the years that followed. It gave me a concrete example around which to center my work as an oral historian and how I should approach trauma in my own interviews. How would I want to be asked about these things? How would I feel if I cried in an interview? How would my tone, pace, and velocity of speech change when a difficult subject came up? What were my boundaries and how would I express them to an interviewer? Which of my memories were solid and which were porous?

In the conversations that I had with my parents after the tenth anniversary of the tragedy, I realized that many of my memories, no matter how vividly I remember that day, were not quite accurate. My mother explained that she hasn’t actually been heading to Stuyvesant High School. Instead, she was trying to get to a school on W 33rd Street through the Brooklyn Battery Tunnel, which enters Manhattan just south of the World Trade Center. This had been part of my narrative for years. My memory wasn’t perfect.

Now, twenty years later, I’m still using these experiences as the basis for how I approach trauma-centered narratives, and, for that matter, any interview where a sensitive subject comes up. It’s remarkable how much I use the same techniques that I learned in grad school, honing them over the past ten years. My pace, my tone, my body language, my ability to pause and give someone space, my interest in putting my feelings aside to privilege a narrator’s story all matters. As oral historians, we often take the life history approach, which can dredge up painful memories from the past, no matter how much we prepare in the pre-interview and planning process. I have to be ready to handle a narrator’s emotions about a troubled relationship with a parent, a divorce that proved formative to a career, a bad review in a newspaper, and yes, a terror attack.

It’s also made me mindful of people’s memories, especially around trauma. Though the historical facts of how I remember 9/11 remain static for me, the details of my mother’s experience were fuzzy. But it’s relevant to how we memorialize events, how we talk about them with our own communities, and what gets documented in the historical record. It’s also made me consider what gets left out of the left out of the story, perhaps because it happened too long ago, was repressed, or doesn’t feel as significant. For example, in talking to my mother about this very article that you’re reading, she told me that I was interviewed by the local newspaper shortly after September 11, 2001 about my experiences that day. I had my picture taken. I said that 9/11 had “changed my life.” Yet, I have no memory of being interviewed until or having my picture taken. And I have no idea why. I only vaguely remember hearing my parents talk about the article. In many of the oral history interviews that I’ve conducted over the last ten years, narrators often say to me, “I can’t remember the last time I thought about this.” That’s exactly how I felt when my mom told me about that newspaper article.

9/11 shaped me in countless ways. That cloudless Tuesday and its aftermath continue to be present in my life, following me from high school to graduate school to my work at the OHC. It’s informed the way I think about life pre-9/11 and over the past twenty years. I’m not sure my memories will ever be less vivid or more pliable, but the impact, personally and professionally, will persist.