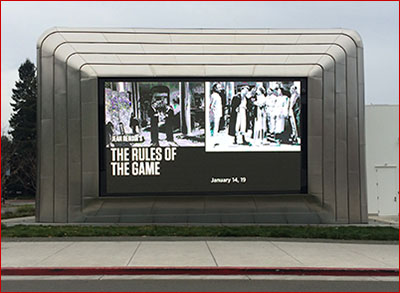 Next week’s screenings (January 14 and 19) of French filmmaker Jean Renoir’s masterpiece The Rules of the Game (La règle du jeu) at BAMPFA provide a rare opportunity to enjoy the 35mm print of this film on the big screen in its state of the art facilities. The screenings of the 1939 film, regarded by many as one of the best films ever made, also provide an opportunity to inform you of library resources like Kanopy – an on-demand streaming video service which provides access to more than 26,000 films – allowing the UCB community to watch movies on anywhere in lieu of the viewing stations in Moffitt Library’s Media Resources Center. An online database of BAMPFA’s extensive collection of film documentation called CineFiles makes it easy to pull up reviews and other information on major filmmakers. Article databases such as FIAF, Film and Television Literature Index, and the MLA International Bibliography can help you locate scholarly articles on Jean Renoir and other figures of world cinema. For readers of French, Cairn.info – an online collection of more than 400 French and Belgian journals – is a quick way to retrieve full-text articles instantly. And lastly, if you’re just looking for good old-fashioned paper books, the Library has more than 183 of those in OskiCat on Jean Renoir alone.

The first Bancroft Library Roundtable of spring semester will take place in the Lewis-Latimer Room of The Faculty Club at noon on Thursday, February 18. Ann Harlow, an independent scholar, will present “The Historical Background of the New Berkeley Art Museum and Pacific Film Archive.”

Ann Harlow will speak about the rocky road the University of California has been on in developing art museums from the 1870s to today. She will show images of the various buildings where art has been exhibited, as well as others that were imagined on paper but never built. Ms. Harlow is the former director of the art museum at Saint Mary’s College, author of an article on the beginnings of San Francisco’s art museums, and curator of the current exhibition at the Berkeley Historical Society, “Art Capital of the West”: Real and Imagined Art Museums and Galleries in Berkeley. She has used Bancroft resources for all of these projects as well as her book-in-progress, a dual biography of art patron Albert Bender and artist Anne Bremer.

The talks are free and open to the public.