This summer the Library invested in a number of archival collections from Adam Matthew Digital. The descriptions here were provided by the company.

Colonial Caribbean: CO Files from The National Archives, UK
This enormous range of unique primary sources covers British governance of 25 islands in the Caribbean from 1624-1872, meeting teaching and research needs across a wide variety of themes, from settlement and colonial rivalries in the region, to the economics of the plantation systems and the impact of slavery, to crime and punishment and the everyday lives of the people that called the islands home. The first module stretches from the turbulent years of early British settlement to the rise of the abolition movement, amongst the fierce rivalries with the Spanish, Danish and French powers in the Caribbean region. Settlement, Slavery, and Empire, 1624-1832 documents the rise of absentee landlords, and traces the rise and decline of the slave trade, from the regular transportation of enslaved peoples through trade and shipping, to the rise of the abolition movement.

Sex and Sexuality
Sex & Sexuality covers a broad range of topics and is drawn from leading archives around the world. From papers of leading sexologists, to LGBTQI+ personal histories, the collection is an essential resource for the study of human sexuality, its complexities and its history. Sourced solely from the renowned Kinsey Institute Library & Special Collections, Module I makes available essential primary sources from the tenures of the first three Institute directors: Dr. Alfred C. Kinsey, Dr. Paul Gebhard and Dr. June Reinisch. While Module II, sourced from archives in the US, UK and Australia, including a number of collections from the ONE National Gay and Lesbian Archives at University of Southern California Libraries, explores LGBTIQ+ personal histories, self-expression and community activism.

Ethnomusicology
Presenting content from across the globe, this diverse and comprehensive resource features thousands of audio field recordings and interviews, educational recordings, film footage, field notebooks, slides, correspondence and ephemera from over 60 fields of study, including sites in West Africa, North America, South East Asia and more. Produced in collaboration with the UCLA Ethnomusicology Archive – a world centre for the study of Ethnomusicology – the content within this collection gives access to the cultural and social lives of the source communities represented within the recordings; allowing users a unique insight into the musical traditions of these communities. This collection therefore allows for the study of cultural identity, social norms, religion and ritual, gender roles, as well as many other themes.

African American Communities
A diverse range of primary source material is showcased in this collection that focuses on race relations across social, political, cultural and religious arenas, focusing predominantly on Atlanta, Chicago, Brooklyn, and towns and cities in North Carolina this collection presents multiple aspects of the African American community. Through pamphlets, periodicals, correspondence, official records and in-depth oral histories, it reveals the challenges of racism, discrimination and integration, and the expressions of a unique African American culture and identity.

American Indian Newspapers
Representing a huge variety in style, production and audience, the newspapers in this database include national periodicals as well as local community news and student publications. This digital collection provides exciting research opportunities into a range of subjects from an Indigenous perspective, including the civil rights era and American Indian Movement (AIM), education, environmentalism, land rights and cultural representation. This resource has been developed with, and has only been made possible by, the permission and contribution of the newspaper publishers and Tribal Councils concerned. Adam Matthew is extremely grateful for their continuing support of this project.

Gender: Identity and Social Change
From traditional constructions of femininity and masculinity, to the struggle for women’s rights and the emergence of the men’s movement, Gender: Identity and Social Change offers three centuries of primary source material for the exploration of gender history. Explore records from men’s and women’s organisations, advice literature and etiquette books to reveal developing gender roles and relations. Gain an insight into changing societal expectations about gender roles through personal diaries and correspondence and explore the life and careers of key figures and pioneers in gender history.

Foreign Office Files for Japan (Expansion of previously purchased content.)
Sourced from the rich FO 371 and FO 262 series at The National Archives, UK, this resource unites formerly restricted Japan-specific documents and is enhanced by the addition of a selection of FO 371 Far Eastern General sub-series, and Western and American Department papers. Topics covered include ultra-nationalism and the Japanese agenda of imperial dominance in the Far East, employment and social conditions in a time of global economic instability, and the ‘Great Kanto Earthquake’ of 1923 which flattened Tokyo. These documents record relations with Axis Powers in the context of changing alliances, the deterioration of relations with the Allies as World War Two reached the Pacific, and American post-war occupation of Japan.

Foreign Office Files for South East Asia
With material drawn from the National Archives, UK, this product provides a Western view of events in the region through official government documents and records covering the wider region and the rising animosity towards the perceived threat of communism at the time. There is a particular emphasis on the turbulent creation of Malaysia, alongside the release of the Cobbold Commission report, the end of the Malayan Emergency, and the Indonesia-Malaysia confrontation.

Race Relations in America
The Race Relations Department, based at Fisk University, was a highly influential think tank offering a forum for discussion and research on racial topics. The work of the Department highlighted topics such as poverty and inequality, class, housing, employment, education and government policy. Its programme attracted many well-known figures in the Civil Rights Movement, including Thurgood Marshall, Martin Luther King Jr., Bayard Rustin, Charles Houston, and Marguerite Cartwright. This resource sheds light on the fascinating work of the Department through the digitisation of extensive records from the Department’s archives, now held at the Amistad Research Center in New Orleans.

Here is the second episode of the Open Access Digital Resources. We present you with the digital library of Francophone Caribbean, Amazonia, and Guayanas (Bibliotheque Numerique Caraibe Amazonie Plateau Des Guyanes). The self-description can be translated as, “Manioc (Cassava) is a digital library specializing in the Caribbean, the Amazon, the Guyana Plateau and the regions or centers of interest linked to these territories. The site is an open-access collaborative project between the University of Antilles and the University of Guyana.” This digital library provides access to several key digital collections related to the region. 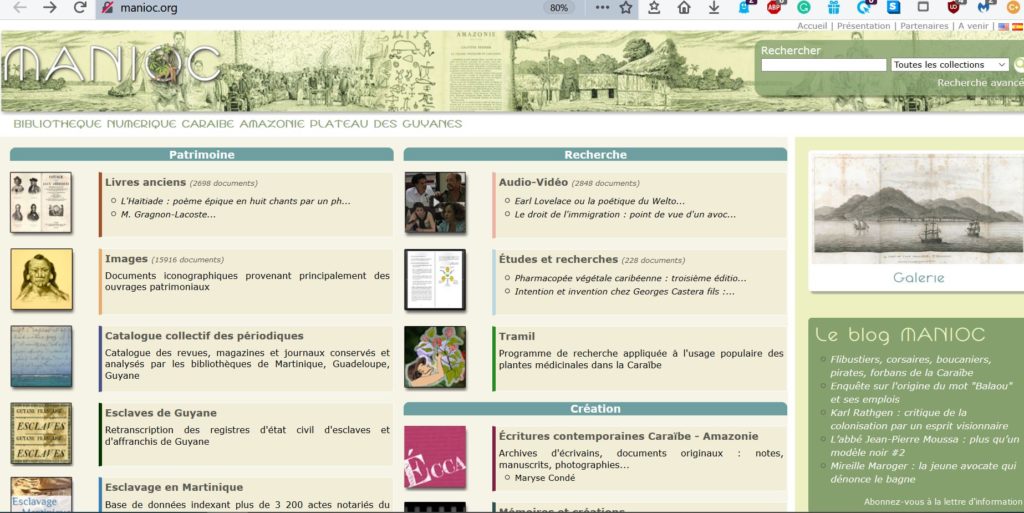 The UC Berkeley Library has acquired a new online resource with the Underground and Independent Comic, Comix, and Graphic Novels digital collection from Alexander Street Press, Volumes I and II.

The library has also acquired additional resources from Drama Online and OverDrive.

In the 19th century and owing to advances in printing technologies, illustrated journals proliferated. The satirical press was among the most graphic and visual engaging genres with their bold caricatures and humorous editorial cartoons. Though difficult to track down in our library’s discovery systems unless you know an exact title, the UC Berkeley Library has a rich collection of these published in Europe and the Americas. Charivari is a weekly from Portugal whose name was probably inspired by the Parisian weekly Le Charivari (1832 to 1937) with the same name. It was published in Porto towards the end of the decade by two illustrators José de Almeida and Joaquim Maria Pinto Silva and provides a critical perspective on the political, economic and cultural reality of Portugal and the world in general. We recently digitized our copy of Charivari and all issues are available through the HathiTrust.

If you like the work in this publication, you’ll enjoy the work of their contemporary Rafael Bordalo Pinheiro too. He is considered Portugal’s greatest caricaturist, and directed several other satirical magazines such as Almanach de caricaturas para ..., O Antonio Maria, and Parodia that have been digitized by the National Library of Portugal and are also held in print in The Bancroft Library.

The UC Libraries now subscribe to SAGE Research Methods, a significant online collection of books, articles, and data tools related to qualitative and quantitative research methods in the social sciences. Some highlights:

Browse resources in a number of disciplines in the social sciences including Anthropology, Communication and Media Studies, Economics,  Education, Political Sciences and International Relations, Psychology, Social Work, Sociology, and more.

For more on how to search SAGE Research Methods, check out this Research Guide. (Also, see the Public Health Library blog on this same topic.)

Representatives from ProQuest will be paying a visit on Tuesday, March 11 from 9:30-11 in 212/218 Doe Library. Here’s how they describe their visit:

Drop in for Coffee/Pastry and a chance to find out what?s new at ProQuest.

Account Manager Karen Bosserman and Western Regional Sales Director Brad Roades  will have literature and will provide individual demos for those interested in exploring some of the new Products PQ has to offer in the Humanities and Social Sciences and discuss some of spring promotions!

Come take a look at:

Trench Journals and Unit Magazines: The Real History of the People?s War. Through the digitized pages of more than 1,500 magazines  written and published by service personnel involved in the Great War, Trench Journals provides scholars with unique perspectives to contract official histories of the conflict.  For libraries this rare and unique collection is a pertinent and high profile acquisition at a time of intense research interest in the 100th anniversary of the First World War.

This is just a sample of what is new!