The Library has acquired an electronic version of the 15 volume set Records of Syria, 1918-1973. This work is a selection, by Cambridge Archive Editions, of British diplomatic despatches and includes 12,000 pages of original research carried out at the National Archives in London. The resource is browsable and searchable and up to 50 pages at a time can be downloaded as a PDF document.

Some of the topics addressed in the documents include:

The Library has recently acquired the Middle East and Central Asian Studies database, which includes more than 740,000 records of journal and newspaper articles, books, and other research publications on the culture and politics of the Middle East, Central Asia, and North Africa. 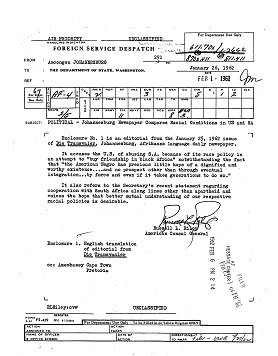 The Library has acquired the online resource Confidential U.S. State Department Central Files, 1960-1969, Africa and the Middle East, which includes U.S. State Department Central Files that have not been microfilmed by the National Archives or distributed by other publishers. It contains a wide range of sensitive materials from U.S. diplomats in foreign countries: reports on political, military, and socioeconomic matters; interviews and minutes of meetings with foreign government officials; important letters, instructions, and cables sent and received by U.S. diplomatic personnel; and reports and translations from foreign journals and newspapers.

The Africa files cover the brutal civil war between Biafra and Nigeria in the late 1960s, the 1964 Rivonia trial of Nelson Mandela and seven leaders of the African National Congress, violent protest against the South African government coupled with police crackdowns on the resistance, the troubled relationship between the U.S. and the apartheid regime, and the first years of independence in Ghana and the Congo. The files on Egypt offer considerable detail on the Egyptian political structure which was dominated by Gamal Abdel Nasser in the 1960s. Political issues are also covered in extensive detail in the files on Iran, Iraq, and Israel. Documents on Iran follow Ali Amin’s tenure as prime minister and his succession by Asadollah Alam. In Israel, State Department personnel tracked developments in the Knesset (Israeli Parliament), the political fortunes of important members of the Israeli government, and the fragile security situation faced by Israel. The countries covered in this module are: Biafra/Nigeria; Congo; Egypt; Ghana; South Africa; Iran; Iraq; Israel; Lebanon; Palestine; Saudi Arabia; the Persian Gulf States (Aden, Bahrein, Kuwait, Muscat & Oman, Qatar, Trucial Sheiks); and Yemen.

The Library now has all three modules of the online resource Foreign Office Files for the Middle East, which include 1971-1974: The 1973 Arab-Israeli War and the Oil Crisis; 1975-1978: The Lebanese Civil War and the Camp David Accords; and 1979-1981: The Iranian Revolution and the Iran-Iraq War.

The Library has acquired the first module of the online resource Foreign Office Files for the Middle East, which covers 1971-1974: The 1973 Arab-Israeli War and the Oil Crisis. Two additional modules, 1975-1978: The Lebanese Civil War and the Camp David Accords and 1979-1981: The Iranian Revolution and the Iran-Iraq War will be added by early 2017.

Records of the Kurds: Territory, Revolt and Nationalism, 1831-1979 includes over 9,000 pages of facsimile documents on the recent history of the Kurdish people, “tracing early insurgencies, inter-relations with neighboring tribes and other ethnic groups, while examining the territories pertaining to the Kurdish homeland. The object of this work is to supply contemporary documents which place events in their geopolitical context. All relevant documents which could be sourced from the records of the Government of India at the British Library, Foreign Office, War Office, India Office, Colonial Office and Cabinet at the National Archives related to the themes of territory and the struggle for it, for the period have been traced and included.”

The Library currently has a trial for Adam Matthew Digital’s collection of FOREIGN OFFICE FILES FOR THE MIDDLE EAST, 1971-1981.

The trial ends February 29. The resource can be accessed at www.archivesdirect.amdigital.co.uk/FO_MiddleEast. With trial access it is not possible to download documents in the collection.

“Digitising full runs of Foreign Office files from The National Archives, this collection provides invaluable insight into events in the Middle East during the 1970s. Covering events such as the Arab-Israeli War, the Lebanese civil war and the Iranian Revolution, Foreign Office Files for the Middle East, 1971-1981 is an essential resource to help students and researchers understand the modern Middle East. This collection documents UK interests in the internal activities and political relationships of countries such as Egypt, Israel, Syria, Iran, Libya and Lebanon, the oil affairs of nations like Saudi Arabia, Bahrain, Algeria and Iraq, as well as participating in military intervention and peace negotiations during key conflicts, and monitoring the UK’s commercial interests. Split chronologically into three modules, Foreign Office Files for the Middle East, 1971-1981 tackles these events using a variety of material, from correspondence between civil servants and embassies, reports and memorandums, to political summaries and personality profiles.”

Please contact me with your thoughts about the usefulness of this resource.

The Library has set up a trial for three primary source collections. The descriptions are from their website.

Cold War Intelligence http://primarysources.brillonline.com/browse/cold-war-intelligence
This collection of 2,360 formerly classified U.S. government documents (most of them classified Top Secret or higher) provides readers for the first time with the declassified documentary record about the successes and failures of the U.S. intelligence community in its efforts to spy on the Soviet Union during the Cold War.

U.S. Intelligence on the Middle East http://primarysources.brillonline.com/browse/us-intelligence-on-the-middle-east
Since 1945, the U.S. intelligence community has had to cover a half-dozen major wars and several dozen smaller but equally bloody armed conflicts in the Middle East, as well as innumerable civil wars, border clashes, armed insurgencies, and terrorist attacks. This comprehensive document set sheds light on the U.S. intelligence community’s spying and analytic efforts in the Arab world, including the Middle East, the Near East, and North Africa. It covers the time period from the end of World War II to the present day, up until the 2002-2003 Iraqi Weapons of Mass Destruction (WMD) assessments, the Global War on Terror, the Iraq War, and Iran’s nuclear program.

U.S. Intelligence on Europe http://primarysources.brillonline.com/browse/us-intelligence-on-europeThis collection of over 4,000 formerly classified U.S. government documents provides a comprehensive survey of the U.S. intelligence community’s activities in Europe, including Eastern Europe, Turkey and Cyprus, covering the time period from the end of World War II to the fall of the Iron Curtain and beyond.

I welcome any feedback you want to provide.
The trial expires October 13.