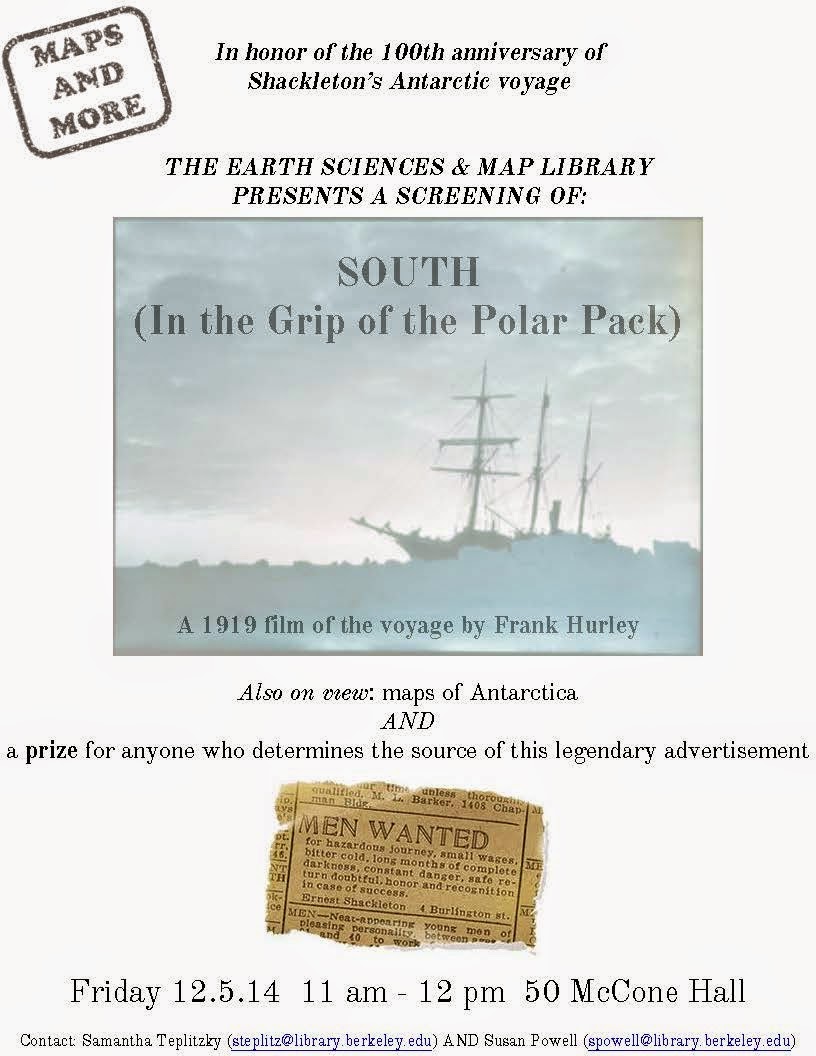 See a screening of the 1919 documentary film of Shackleton’s Endurance Expedition and highlights of Antarctica maps from the collection.

Lion statue at the entrance of the village of Tebtunis

Since its foundation (2000), CTP has facilitated and supported research on the Tebtunis papyri, a body of texts that has greatly advanced our knowledge and understanding of village life in Greek and Roman Egypt.

In this blog you will find information and updates about Greek in Tebtunis, a research project currently underway at CTP. The project is being carried out by Dr. Micaela Langellotti, postdoctoral fellow, under the supervision of Prof. Todd Hickey.

Greek in Tebtunis focuses on the decipherment, interpretation and digitization of the Greek papyri of Berkeley’s largely unpublished Tebtunis collection.

The aims of the project are threefold:

Greek in Tebtunis has been made possible by the generous support of the Elios Charitable Foundation and the National Hellenic Society.

The Bancroft Library Gallery is hosting a new exhibit, California Captured on Canvas, featuring a selection from its collection of over 300 oil paintings. These 43 paintings representing the California landscape, its inhabitants and key historical events are on display, several of which have never been exhibited before. Enjoy an entirely different take on the way land is viewed–as not just geography and location but also as a living and animate entity full of natural wonders.

Some special highlights include paintings from the Robert B. Honeyman, Jr. Collection of Early Californian and Western American Pictorial Material, which include scenes of Yosemite and the Gold Rush. Renowned California artists represented are William Keith, Charles Grant and Thomas Hill.

View California history through the lenses of artists! The exhibition will be available until March 6, 2015 at the Bancroft Library Gallery. Hours are 10am-4pm, Monday through Friday.

His research interests lie in the social, cultural and economic history of Graeco-Roman Egypt. His first book, Wine, Wealth, and the State in Late Antique Egypt: The House of Apion at Oxyrhynchus (Ann Arbor 2012) concerns the best documented estate from the postclassical Mediterranean, that of the Flavii Apiones at Oxyrhynchus, and challenges recent arguments that this entity was a profit-driven enterprise. He is currently writing a ”collective biography” of the crocodile priests of Tebtunis.

Her research interests focus on the social and economic history of Graeco-Roman Egypt, and more broadly of the Roman empire. She is currently completing a book entitled Village economy and society: early Roman Tebtunis, which aims to construct the first detailed village study for the Roman empire. At CTP she is investigating the unpublished Greek papyri of the Tebtunis collection in order to examine how far Greek culture and structures had an impact on an Egyptian village in the Roman period.

His primary research interest is in the diachronic study of magical ritual from Greek antiquity through Byzantium and into modern Greece, for which papyri are a crucial source of evidence. He is also interested in Greek epistolography, Classical and Byzantine, and is studying several personal letters on papyrus from the Tebtunis collection in that context.

She oversees CTP’s reference library by submitting requests for new library materials, catalogs library materials into the department’s database and organizes the reference materials according to Duke University’s Checklist of Editions of Greek, Latin, Demotic, and Coptic Papyri, Ostraca and Tablets. In addition to overseeing CTP’s library she is involved in two other projects here at CTP. The first is performing a complete inventory of the Tebtunis Papyri Collection. The second project is to assign P.Hearst numbers to each of our Hearst Papyrus fragments and then enter a description of each one into our papyri database http://tebtunis.berkeley.edu/form

She is primarily interested in the Roman economy and ancient agriculture. Her overall work aims to evaluate the economic and social realities of Roman imperialism by examining a wide range of material evidence and textual sources. More recently she has been cultivating an interest in Egypt especially, thanks to opportunities to study papyrology and work with artifacts from Tebtunis at CTP.

The Mathematics Statistics Library (100 Evans Hall) is hosting an exhibit on 19th century French mathematician and physicist Siméon-Denis Poisson through December 17, 2014. Poisson’s equation, or the potential theory equation, is named for his famous correction of Laplace’s second order partial differential equation for potential. The exhibit includes many of his major works, such as a series of memoirs on definite integrals and his discussion of the Fourier series. Poisson also wrote hundreds of essays, notes, reports and several books, many of which are available online via OskiCat. During his career as a “teacher-scholar,” he taught as a professor at the Université de Paris and had the honor of being elected to the Académié des Sciences. To learn more about Poisson’s life and work, take a look at the exhibit catalog or visit the exhibit yourself!

Take a break from a long week of classes by checking out movie night at Moffitt Library! This new series, showing films on the first Thursday of the month in the Media Resources Center, arose from a student suggestion for events they would like to see in the libraries. The series features documentaries selected by students, with a focus on contemporary and engaging issues, and provides a setting for students to gather and meet with friends.

December’s movie, Xmas without China, will show on Thursday, Dec 4. The film examines the pervasive use of Chinese-made products in American households as well as negative attitudes towards China. The film follows Tom Xia on a mission to challenge neighbors to forgo Chinese products during Christmas time, confronting their misguided views of Chinese goods and labor.

Bring your UCB Student ID for free admission. Doors open at 6:30pm and the showing begins at 7pm in 150D Moffitt. Bring friends for popcorn and Movies @ Moffitt!