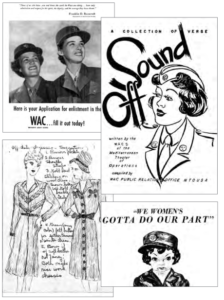 A new Library acquisition is Women at Work during World War II: Rosie the Riveter and the Women’s Army Corps. This module contains two major sets of records documenting the experience of American women during World War II: Records of the Women’s Bureau of the U.S. Department of Labor, and Correspondence of the Director of the Women’s Army Corps. Primary sources document a wide range of issues pertinent to women during this time of turbulent change, including studies on the treatment of women by unions in several midwestern industrial centers, and the influx of women to industrial centers during the war. Topics covered in records and correspondence include women’s work in war industries, pivotal issues like equal pay, childcare and race, and extensive documentation on the women who joined and served in the Women’s Army Corps as WACs.