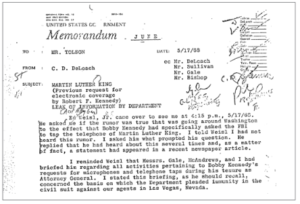 Another recent acquisition of the Library is the ProQuest History Vault module, FBI Confidential Files and Radical Politics in the U.S., 1945-1972. Under the leadership of J. Edgar Hoover, the FBI vigorously investigated and tracked the activities of Communist groups, Communist-front groups, and other radical organizations in the U.S. This module consists of records of the FBI and the Subversive Activities Control Board from 1945-1972.

Highlights of this module include J. Edgar Hoover’s office files; documentation on the FBI’s so-called “black bag jobs,” as they were called before being renamed “surreptitious entries”; and the “Do Not File” File. The “Do Not File” file consists of records that were originally supposed to be destroyed on FBI Director J. Edgar Hoover’s order, however, through both intended and inadvertent exceptions to this order, large portions of these files survived. Another key collection in this module consists of the records of the Subversive Activities Control Board (SACB). The SACB files constitute one of the most valuable resources for the study of left-wing radicalism during the 1950s and 1960s.