The library certainly has no shortage of copies of the bard’s plays, but there is something to be said for seeing Shakespeare’s work as it was meant to be seen—performed. Alas, performances of Shakespeare tend to be difficult to attend on a regular basis. However, the UC Berkeley Libraries just gained access to the entirety of the BBC Television Shakespeare Streaming Series. The series includes performances of 37 separate plays, originally adapted for television and broadcast between 1978 and 1985 in the UK. Now, you can access them from the comfort of your couch. Whether you’re a casual fan or a lifelong scholar of Shakespeare, you’ll be grateful for your library proxy as you settle in to watch actors such as John Cleese and Helen Mirren work their—and Shakespeare’s—magic. Get started here.

Grab your notes, your copy of the play, or maybe just some popcorn and enjoy some of the greatest work in the English language. 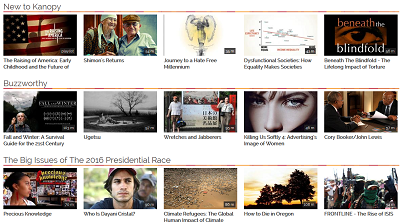 The Library has recently subscribed to Kanopy, an on-demand streaming video service which provides access to more than 26,000 films, including titles from PBS, BBC, Criterion Collection, Media Education Foundation.

It is simple to make clips from these films and embed them (or the full films) in bCourses. Please contact me if you need any assistance with this.

Many films have closed captioning, and Kanopy is in the process of adding more every month. You can limit to only captioned films through Advanced Search. Let me know if you need closed captioning for a particular title, and we can request it from Kanopy.