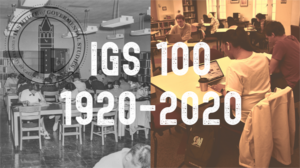 The Institute of Governmental Studies is celebrating its 100th anniversary this year! A hundred years ago, as efforts to reform government corruption were taking root across the country, IGS was founded by political scientists who saw an opportunity to build public administration into an academic discipline to educate new generations of civic leaders. The library has been the heart of IGS since its founding, and holds more than 400,000 items, many of them unique reports, pamphlets, bibliographies, and other ephemera.

An exhibit now on display in the IGS Library highlights the people and projects that built IGS over the last century. The Institute will be celebrating its centennial with events and programs throughout the year, so please check igs.berkeley.edu for updates.

The IGS Library is open to the general public and the campus community from 10am-5pm, Monday through Friday. Email igsl@berkeley.edu or call us at 510-642-1472 with any questions.