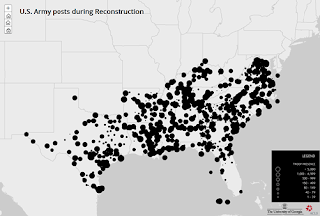 “Mapping Occupation, by Gregory P. Downs and Scott Nesbit, captures the regions where the United States Army could effectively act as an occupying force in the Reconstruction South. For the first time, it presents the basic nuts-and-bolts facts about the Army’s presence, movements that are central to understanding the occupation of the South. That data in turn reorients our understanding of the Reconstruction that followed Confederate surrender. Viewers can use these maps as a guide through a complex period, a massive data source, and a first step in capturing the federal government’s new reach into the countryside.

“From the start of the Civil War and through the 1870s, the U.S. Army remained the key institution that newly freed people in the South could access as they tried to defend their rights. While slaves took the crucial steps to seize their chance at freedom, soldiers helped convince planters that slavery was dead, overturned local laws and court cases, and in other ways worked with freed people to construct a new form of federal power on the ground.

“The army was central to the story of Reconstruction, yet basic information about where the Army was, in what numbers, and with what types of troops, has been difficult to find. Downs gathered this information from manuscript sources in the National Archives and other repositories in preparation for his book, After Appomattox: Military Occupation and the Ends of War (Cambridge, Harvard University Press, 2015). Mapping Occupation presents an expanded version of this information in an online interface and as a downloadable data. Downs and Nesbit then used these locations to create rough estimates of the Army’s reach and, importantly, the places from which freedpeople and others could reach the Army in order to bring complaints about outrages and other forms of injustice. The methods by which we created these estimates are discussed here.

“Mapping Occupation presents this history and geography in two ways: as a spatial narrative, guiding the user through key stages in the spatial history of the army in Reconstruction; and as an exploratory map, in which users are free to build their own narratives out of the data that we have curated here. Both afford visitors to the site important tools for mapping the Army’s reach in the Reconstruction South.”