It was in those days when I wandered about hungry in Kristiania, that strange city which no one leaves before it has set its mark upon him . . .

So opens Knut Hamsun’s novel, Sult (Hunger). When Sult was published in 1890, it represented a literary breakthrough not just in Scandinavia but also throughout Europe. Though Hamsun’s later novels would take more conventional forms, Sult was a harbinger of 20th century modernism for its stream-of-consciousness narration and its focalization of a vagabond figure who struggles to cope with modern urban life. The novel’s plot is spare: an unnamed—and unreliable—narrator arrives in Kristiania (now Oslo); he struggles to get work as a writer and has occasional run-ins with strangers; three months later, he leaves the city by boat. What makes the novel remarkable is how it portrays the inner life of a—literally—starving artist. Through the narrator’s increasingly wild musings, it is difficult for the reader to decipher whether the protagonist is insane or just hungry, and whether his hunger is forced upon him by poverty or voluntarily undertaken as part of a fascinating, yet ambiguous, creative project. As Hamsun put it elsewhere, Sult aims to reveal “the unconscious life of the soul.”[1]

Knut Hamsun is widely accepted as one of Norway’s greatest authors. He is second only to Henrik Ibsen in terms of international renown and he won the Nobel Prize for literature in 1920 for his novel Markens grøde (“Growth of the Soil”). However, his legacy has been hotly debated, and his reputation severely damaged, by his strong Nazi sympathies and support of the Nazi occupation of Norway (1940-45).

Though Sult was written in Norwegian, it is a Norwegian highly inflected by Danish spelling. For 400 years, Norway was under Danish rule, during which time Danish was the language of writing and instruction in Norway. After declaring independence from Denmark in 1814, Norwegians were eager to establish an official language that better reflected the range of Norwegian dialects, but this has proven to be a long and contentious process. When Sult was published, Norway still had a shared publishing culture with Denmark, and, indeed, the first edition of Sult was published in Copenhagen.

Hunger has been taught in various courses at UC Berkeley in the Department of Scandinavian, including undergraduate courses on “place in literature” and “consciousness in the modernist novel,” as well as in graduate courses on affect and fictionality. The department, which is one of only three independent Scandinavian departments in the United States, also offers courses in beginning and intermediate Norwegian, a language spoken by more than 5 million people. In addition to the 1890 first edition of Sult, the UC Berkeley Library owns multiple English translations of this landmark work.

Contribution by Ida Moen Johnson,
PhD Student in the Department of Scandinavian

Although based on a legend transmitted through the popular literature and drama of German-speaking Europe from the late 16th century onward (and which found an English-speaking audience through translation of the texts and Christopher Marlowe’s dramatic adaptation), Goethe’s own version of Faust lives at the heart of the German literary canon. The play’s “pact with the Devil” narrative tells the story of Dr. Faust, who, seeking deeper knowledge than the academy can provide, strikes a bargain with Mephistopheles which requires him to serve Faust and to show him all of the truths in the world. However, should Faust ever become complacent, his life would be forfeit. A series of fantastic, and tragic, events follows, and in the end Faust finds that his life is at risk.

Goethe calls upon a variety of meters to tell his tale, which combines elements of contemporary European society with classical themes. He worked on the play intermittently over the course of nearly 50 years beginning in the 1770s (from which a copied manuscript survives), and after releasing his early efforts as Faust, ein Fragment in 1790, decided that the full play should be published as two parts: Part I, published in 1808, and Part II, published posthumously in 1832.  Goethe’s Faust would become highly influential, inspiring music, theater, opera, film, and literature (including Bulgakov’s The Master and Margarita) from the 19th century to the present. UC Berkeley Library owns numerous editions of the text, including the initial 1790 publication which was included in a multi-volume set of Goethe’s collected works and is housed in The Bancroft Library. A new project funded by the German Research Foundation called Faustedition has made Faust even more accessible by putting the full text online, and allowing line-by-line reading of variations across editions. Importantly, the project also includes an online archive of Goethe’s handwritten papers and letters, transcribed and searchable, which are related to the development of Faust.

The German language and its literature have been a fixture at Berkeley since the university’s founding. Today, the German Department offers courses at all levels and encompassing the breadth of the Middle Ages to the 21st century. In addition to Modern German, earlier forms of the language including Old Saxon, Old High German, Middle High German, and Early New High German are all taught. Goethe’s writings continue to be studied and read extensively. 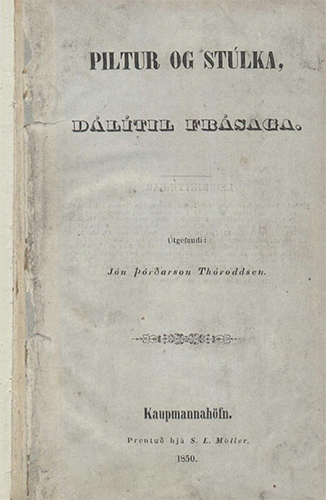 Icelandic literature after the Reformation was primarily the domain of poetry until the mid-19th century. Following a small number of unpublished collections of short stories and folk tales and several published prose translations into Icelandic in the 18th century, currents of European influence encouraged the sustained development of literary prose, at first short stories, which in some cases also drew upon local saga and folkloric traditions. Credit for the first Icelandic novel is generally given to Jón Thóroddsen (1818-1868) for his 1850 work Piltur og Stúlka (Lad and Lass). As scholar and statesman Jón Sigurðsson would write in his introduction to a posthumous edition (1876) of Thóroddsen’s second, unfinished novel Maður og Kona (Man and Woman), “Various attempts have been made in our country before this to compose works of fiction similar to those which had appeared in foreign lands in modern times, which are called in English ‘novels,’ because they draw their material from modern everyday life, and not from ancient events or historical writings, as do the knightly romances; but this story of Thóroddsen’s [Piltur og Stúlka] is the most important of all these tales, and is hence universally conceded to be the first Icelandic novel [translation from Reeves’ 1890 edition of Lad and Lass].”

Born in western Iceland, Thóroddsen traveled to Copenhagen to study law, where he also pursued literary interests as co-creator and editor of a liberal arts annual to which he contributed his own poetry and several short texts (in addition to briefly joining the Danish army in its fight against rebellious Germans). During the winter of 1848-9 he wrote Piltur og Stúlka, which was published in Copenhagen in 1850 (a second edition was published in Reykjavik in 1867). Although indebted to the English romantic love story, this tale of the complicated love between Indriði and Sigríður, which begins and ends in the countryside and includes a journey to Reykjavik at its middle, is highly localized in its descriptions of contemporary Icelandic society. Thóroddsen was a keen observer of character, and his readers were especially drawn to the comic traits with which he endowed some of them.  Other aspects of description as well as narrative reveal the influence of the Icelandic sagas. In 1850 Thóroddsen returned to Iceland, where he worked as a bailiff, and nearly completed his second novel before his death in 1868. Piltur og Stúlka has been published in a number of subsequent editions, translated into four languages, and was adapted for the stage in Iceland in 1933. The UC Berkeley Library owns the 1973 reprint of the 1948 edition, which was published in Reykjavik.

The Modern Icelandic language has been taught at the introductory level in UC Berkeley’s Scandinavian Department since 2015, when a pilot program was launched with the assistance of the Institute of European Studies.

Although he had previously written a handful of articles, a book length review of a Hans Christian Andersen novel, and a magister dissertation on irony, the Danish philosopher, theologian and litterateur Søren Kierkegaard (1813–1855) considered Enten – Eller (Either/Or) to be the first work of his authorship proper. Under the pseudonym Victor Eremita, Kierkegaard published the two-volume novel with C. A. Reitzel in 1843. Kierkegaard published under pseudonyms so that the reader would not turn to him as an authority on how to interpret and live out the works. Henriette Wulff wrote from Copenhagen to H. C. Andersen in Germany, “Recently a book was published here with the title Either/Or! It is supposed to be quite strange, the first part full of Don Juanism, skepticism, et cetera, and the second part toned down and conciliating, ending with a sermon that is said to be quite excellent. The whole book has attracted much attention.”[1] By the standards of the small Danish book market, it sold well, and went into a second edition in 1849. The second edition is of especial interest because archival evidence indicates that Kierkegaard gave a gift copy of it to H. C. Andersen. This gesture can be seen as a rapprochement, since Kierkegaard’s 1838 review of Andersen’s Kun en Spillemand (Only a Fiddler) was quite scathing. Previously, Andersen had tried to show that there were no hard feelings by gifting Kierkegaard a copy of his Nye Eventyr (New fairytales), but Kierkegaard made no reply.  Unfortunately, Andersen’s copy of the second edition of Enten – Eller is believed to be no longer extant. (In 2001, Niels Lillelund published a Nordic Noir novel entitled Den amerikanske samler [The American collector], which follows a bookstore owner’s pursuit of this priceless item.)

Enten – Eller has been translated into English, Spanish, Russian, and Chinese, as well as into a number of other languages. In addition to having online access to the second edition, the UC Berkeley Library has a hardcopy of the fourth edition in its holdings.

Danish is spoken by roughly six million people around the world. The Department of Scandinavian at UC Berkeley regularly offers courses in both the Danish language and in Danish literature in translation. The Danish language is taught by Senior Lecturer Karen Møller, and Danish literature is taught by Professor Karin Sanders. In the fall of 2018, Scandinavian 180, “The Works, Context, and Legacy of Søren Kierkegaard” introduced a group of students to Kierkegaard, the Danish Golden Age, and the author’s influence on twentieth-century philosophy and world literature. The course was taught by the author of this essay.