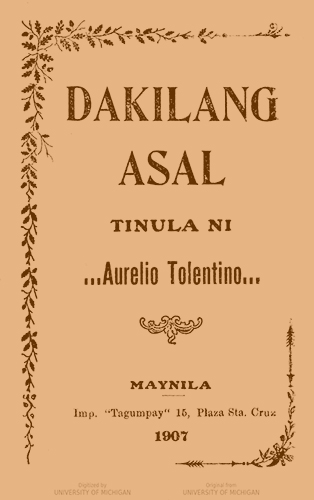 “Tagalog, or Filipino, is said to mean  ‘river people’ from taga- ‘place of origin’ and ilog “river,'” writes the linguist and historian Andrew Dalby. Already a language of written culture in the region of Manila on the island of Luzon when the Spanish invaded in the late 16th century,  Filipino spread across the Philippine archipelago over thousands of years and was declared the first official language in the 1940s when independence from the United States was in sight.”[1]

During the Spanish colonial period, publishing in Filipino and other indigenous languages was largely religious in inspiration while incorporating distinctive Tagalog poetic forms. One of Aurelio Tolentino’s most famous works of verse, Dakilang Asal  (“Noble Behavior”) is a series of ten didactic poems conveying a code of upright moral conduct meant to instruct the lives of Filipino youth. Presented as the basis for a buhay ng lahat ng dunong  (life of all wisdom), Tolentino emphasizes key ethical virtues that remain prominent in Filipino culture, i.e. parental reverence, utang na loob (debt of gratitude), cleanliness, modesty, and humility.

The Department of South & Southeast Asian Studies (SSEAS) at UC Berkeley offers both undergraduate and graduate instruction and research in the languages and civilizations of South and Southeast Asia from the most ancient period to the present. Instruction includes intensive training in several of the major languages of the area including Bengali, Burmese, Hindi, Khmer, Indonesian (Malay), Pali, Prakrit, Punjabi, Sanskrit (including Buddhist Sanskrit), Filipino (Tagalog), Tamil, Telugu, Thai, Tibetan, Urdu, and Vietnamese, and specialized training in the areas of literature, philosophy and religion, and general cross-disciplinary studies of the civilizations of South and Southeast Asia.[2] Outside of SSEAS where beginning through advanced level courses are offered in Filipino, related courses are taught and dissertations produced across campus in Asian American Studies, Comparative Literature, Ethnic Studies, Folklore, History,  Linguistics, and Political Science (re)examining the rich history and culture of the Philippines.[3]