Saunders Lewis, the celebrated Welsh writer, public intellectual, and nationalist, delivered his rousing speech, “Tynged yr Iaith” (“The Fate of the Language”) on BBC on February 13, 1962. Lewis was a passionate advocate for the Welsh language and the culture it embodies, and sought to both revive the language and craft his own literary contributions in it.

In the speech, Lewis lays out the historical suppression of the Welsh language and defines its history as one not only of linguistic or cultural importance, but one firmly motivated by political ends. This has led to the current “crisis” of the late 20th century, a time when, based on a decline of Welsh speakers in a recent census, Lewis views Welsh to be a fading language of a minoritized population. He suggests that although the English were responsible for Welsh’s marginalization, more recently it is the Welsh themselves who have allowed the language to fade, and it is their responsibility to save it.

Lewis was born in Wales in 1893 and spoke Welsh growing up. He fought in World War I and served alongside Irish soldiers, which may have influenced his ideas about nationalism and language. He went on to become a professor of literature and an activist, forming a nationalist party for Wales, Plaid [Genedlaethol] Cymru, that is still active today. As a writer, he is most known for his Welsh-language dramatic plays, but he also wrote extensively in fiction, poetry, literary criticism, and essays. He was nominated for the Nobel Prize in 1970, and his legacy lives on as one of the most important figures in Welsh literature and culture. 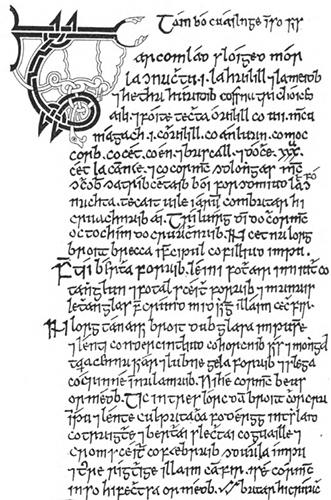 After Greek and Latin, Irish has the oldest literature in Europe, and Irish is the official language of the Republic of Ireland.[1] The prose epic Táin Bó Cúalnge (The Cattle Raid of Cooley) narrates the battles of Irish legendary hero Cúchulainn as he single-handedly guards a prize bull from abduction by Queen Medb and her Connacht army. The tale is the most important in the broader mythology of the Ulster Cycle. The versions we know survive in fragments from medieval manuscripts (notably Lebor na hUidre, the oldest existing text in Irish, the Yellow Book of Lecan, and the Book of Leinster), but the story itself is most likely part of a pre-Christian oral tradition.

In the story, Queen Medb seeks to match her husband Ailill’s wealth through the acquisition of a bull, and she resorts to a raid after her attempt at trade falls through. Inconveniently, all the men in Ulster who might defend the bull have been cursed ill. Cúchulainn, the only man left standing, challenges warriors in Medb’s army to a series of one-on-one combats that culminates in a tragic three-day fight with his foster-brother and friend, Ferdiad. Along the way, Cúchulainn meets his father, the supernatural being Lugh; enjoys supernatural medical care; and transforms into a monster during his battle rages. After Ferdiad’s death, the Ulster men rally and bring the battle to a triumphant finish. Medb’s army is sent packing, but not before she succeeds in smuggling out the bull.

During the early 20th century, the Táin inspired Irish poets and writers such as Lady Gregory and William Butler Yeats, while Cúchulainn served as a symbol for Irish revolutionaries and Unionists alike. The Táin and its legends are routinely taught in UC Berkeley courses such as Medieval Celtic Culture, Celtic Mythology and Oral Tradition, and The World of the Celts. In 1911, the first North American degree-granting program in Celtic Languages and Literatures was founded at Berkeley, and the Celtic Studies Program continues to thrive today. Faculty from the departments of English, Rhetoric, Linguistics, and History participate in teaching regular courses in Irish and Welsh language and literature (in all their historical phases), and in the history, mythology, and cultures of the Celtic world. Breton is also offered regularly, and Gaulish, Cornish, Manx, and Scots Gaelic are foreseen as occasional offerings.[1]

An Béal Bocht (1941), or The Poor Mouth, written by Brian O’Nolan (Ó Nualláin) under the pseudonym Myles na gCopaleen, is one of the most famous Irish language novels of the 20th century. O’Nolan, who most famously published works such as At-Swim-Two-Birds and The Third Policeman under the name Flann O’Brien, wrote in both English and Irish as a journalist and author.

O’Brien takes up the subject of the Irish Literary Revival, a movement in the early 20th century spearheaded by such figures as Lady Gregory and W.B. Yeats who tried to repopularize the Irish folklore and raise the ‘language question’ of Ireland. He simultaneously parodies the genre of Gaeltacht autobiography, autobiographies written in Gaelic that emphasize rural life in Ireland, such as An t-Oileánach (The Islandman) by Tomás Ó Criomhthain and Peig by Peig Sayers, and critiques aspects of the revival.

An Béal Bocht begins with the birth of the narrator, Bónapárt Ó Cúnasa, and follows his life in Corca Dorcha, an impoverished town in the west of Ireland. The town’s rurality attracts the elite from Dublin in search of ‘authentic’ Irishness. Corca Dorcha certainly fits the description — it never stops raining, it’s extremely remote, and crucially, everybody speaks only Irish. The large numbers of visitors from Dublin insist that they love the Irish language, and that one should always speak Irish, about Irish, but ultimately they find Corca Dorcha to be too poor, too rainy, and ironically, too Irish. The very authenticity they sought drives them away to bring their search for authenticity elsewhere.

An Béal Bocht is regarded as a masterful satire, deftly critiquing the genre, the Dublin elite who supposedly supported Irish language revival but avoided rural realities, and the state’s failure to maintain authentic Gaeltacht cultures. The title comes from the Irish expression — ‘putting on the poor mouth’ — which means to exaggerate the direness of one’s situation in order to gain time or favour from creditors. In the novel, there is also the repeated phrase, “for our likes will not be (seen) again,” taken directly from An t-Oileánach.

For more than a century, UC Berkeley has been a locus for the study of Irish culture, language, and literature. Faculty from the departments of English, Rhetoric, Linguistics, and History participate teach courses in Irish and Welsh language and literature (in all their historical phases), and in the history, mythology, and cultures of the Celtic world.[1] The Celtic Studies Program offers the only undergraduate degree in Celtic Studies in North America. Following a visit by President Michael Higgins in 2016 to foster relationships between Irish universities and UC Berkeley, the campus’s Institute of European Studies launched the Irish Studies Program.[2] Flann O’Brien’s works are taught in UC Berkeley classes such as Modern Irish Literature and the English Research Seminar: Flann O’Brien and Irish Literature.