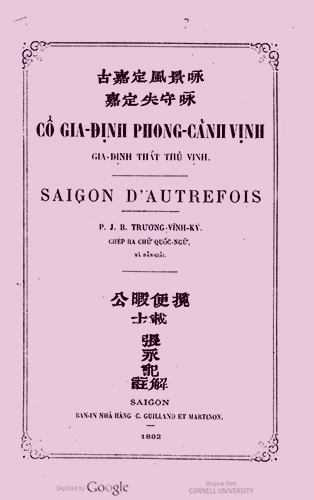 In the 17th century, French Catholic missionaries employed the Roman alphabet to devise a unique orthography for the Vietnamese language. This was the first time in world history that an alphabet represented distinctions in tone.[1] This specially developed Latin script or quốc ngữ, with its double diacritics, coexisted with hán nôm — the Vietnamese adaptation of Chinese script — for three centuries before triumphing under Colonial rule.[2]  Scholar Trương Vĩnh Ký (Pétrus Ky) rewrote and annotated this rare work of poetry in romanized Vietnamese toward the end of the 19th century featured here in its original version of the “rhyme-prose” in hán nôm script. It describes many interesting landscapes and social life customs in Gia Dinh (Hồ Chí Minh City) today.

The Department of South & Southeast Asian Studies (SSEAS) at UC Berkeley offers both undergraduate and graduate instruction and research in the languages and civilizations of South and Southeast Asia from the most ancient period to the present. Instruction includes intensive training in several of the major languages of the area including Bengali, Burmese, Hindi, Khmer, Indonesian (Malay), Pali, Prakrit, Punjabi, Sanskrit (including Buddhist Sanskrit), Filipino (Tagalog), Tamil, Telugu, Thai, Tibetan, Urdu, and Vietnamese, and specialized training in the areas of literature, philosophy and religion, and general cross-disciplinary studies of the civilizations of South and Southeast Asia.[3] Outside of SSEAS beginning through advanced level courses are offered in Vietnamese, related courses are taught and dissertations produced across campus in Asian American Studies, Comparative Literature, Ethnic Studies, Folklore, French, History, Linguistics, and Political Science (re)examining the rich history and culture of Vietnam.[4] UC Berkeley’s Center for Southeast Asia Studies is also the editorial home of the Journal of Vietnamese Studies, published by the University of California Press.[5]