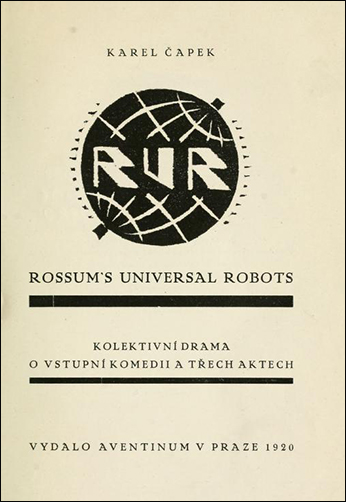 Karel Čapek (9 January 1890 – 25 December 1938) was a Czech writer of the early 20th century. He had multiple roles throughout his career, including playwright, dramatist, essayist, publisher, literary reviewer, photographer and art critic. Nonetheless, he is best known for his science fiction including his novel War with the Newts and the play R.U.R. (Rossum’s Universal Robots), which introduced the word “robot” for the first time in the English language.[1] He also wrote many politically charged works dealing with the social turmoil of his time. Largely influenced by American pragmatic liberalism, he campaigned in favor of free expression and utterly despised the rise of both fascism and communism in Europe.

A funny and surreal story of servitude and technology, R.U.R. was Čapek’s first major work for the stage. The play is a gloriously dystopic science-fiction fantasy about robots and the brave new world of the men who mass-produce them. Robots multiply, are bought and sold and gradually take over every aspect of human existence. As people grow idle and stop procreating, the robots rebel and destroy almost the entire human race. The play was first performed in Prague in 1921.

UC Berkeley professor Ellen Langer describes the novel and the title as follows, “The word robot was derived from the Czech robota, which means “forced labor” — like the French word corvée. The play was an instant hit in Europe and was acclaimed in the United States, perhaps because it captured the terror of those times. World War I had barely ended when the Bolshevik Revolution made Europeans fear an uprising by factory workers. To Čapek, an impassioned democrat, the dictatorship of the proletariat seemed as abhorrent as the recently overthrown Austro-Hungarian autocracy. R.U.R. expressed an idealistic yearning that mass production would free people from want, but realism cautioned that industrialization could also usher in an even more powerful tyranny.

The play seems preachy by current standards, but, as Langer says, “this was an era of polemical plays.” It caused such an intellectual stir in London that Čapek sought to explain its message in an essay published in 1923: “We are in the grip of industrialism; this terrible machinery must not stop, for if it does it would destroy the lives of thousands. It must, on the contrary, go on faster and faster, even though in the process it destroys thousands and thousands of other lives . . .  A product of the human brain has at last escaped from the control of human hands. This is the comedy of science.” Thus was born a term that promised either service or subjugation, and, over time, robots migrated from fictional characters to functional creations.[2]

The history of teaching Czech at UC Berkeley is closely tied to the history of the Department of Slavic Languages and Literatures. Currently, each year, Dr. Langer offers courses in Basic and Continuing Czech. Besides, the language teaching Professor John Connelly of the Department of History specializes in the Modern East and Central European Political and Social History and History of Catholicism. His groundbreaking research on the history of education came to fruition in his critically acclaimed book Captive University: The Sovietization of East German, Czech, and Polish Higher Education, 1945-1956.