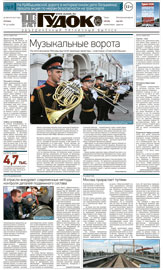 The Library has acquired the Russian daily newspaper, Gudok, which has been in continuous publication since 1917 and is one of the country’s oldest and leading trade newspapers. Since its inception, it has covered a wide range of topics dealing with the railway industry. It has also provided critical commentary on Soviet and post-Soviet Russian culture, politics, and social life. Its primary purpose has been informing the general Soviet and subsequently Russian reader with the more substantial goings on in the country in combination with a mix of biting social commentary and satire, one of the newspapers most popular features.