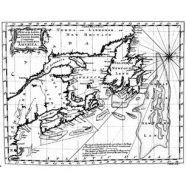 A recent addition to the resources we acquire through British Online Archives is British Pamphlets Relating To the American Revolution, 1764-1783. According to the collection description, it “includes a copy of every available British and Irish pamphlet relating to the American Revolution that was printed in Great Britain between January 1st 1764 and December 31st 1783. Broadsides and controversial books which are relevant to the various aspects are also included. Two publications that lie outside the chronological limits of The American Controversy have also been included, one from 1763 and another from 1784, in order to complete a series of tracts on a common theme.

“In addition to British and Irish pamphlets, those American and European pamphlets that were reprinted in Britain between 1764 and 1783 feature alongside British parliamentary speeches that were published for outside readers, public reports and papers (though not government documents such as royal proclamations and parliamentary bills and acts). Pamphlets concerning Quebec have been included as the debate over its administration and government impinged on the pre-war disputes between Britain and the American colonies.”