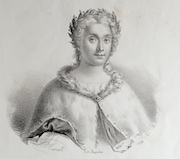 “In the eighteenth century, Laura Bassi was a scientist, professor at the University of Bologna, and member of the Bologna Academy of Sciences. Among the very first female professional scholars, her life (1711-1778) and work can tell us much about the personal and professional lives of early women scientists, their place in Enlightenment intellectual networks, as well as the spread of Newtonian physics in the Italian peninsula. Stanford history professor Paula Findlen is currently completing a scholarly biography on Bassi, while the Stanford University Libraries – in partnership with the Biblioteca comunale dell’Archiginnasio di Bologna and the Istituto per i Beni Artistici, Culturali e Naturali della Regione Emilia-Romagna – has brought Bassi’s family archive to the web.”

“The Bassi Veratti Collection web site developed and hosted by Stanford Libraries features high-resolution digital images of the complete contents of the Bassi e famiglia Veratti Archive in a robust discovery and display environment. This remarkable project undertaken by the Digital Library Systems and Services department is notable for the extent of cooperation with colleagues in Bologna. A fully bilingual website, it showcases the way that new technologies have enhanced the traditional print archive. 672 letters, diplomas, poems, and other documents have been digitized, while the richly detailed inventory created by Archiginnasio archivists has been transformed into a bilingual and fully-indexed search engine to the collection. These two components have been seamlessly united in an intuitive and well-designed scholarly website.”