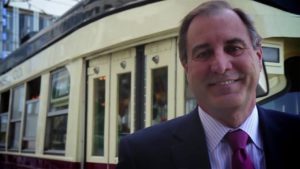 ay we are excited to release the oral history interview of Rick Laubscher. Born in 1949, Rick came of age amid the bustle of Market Street at the family’s business, Laubschers’ Delicatessen. It was in these early years that he developed a fascination in transportation, and a special love of streetcars; the “iron monsters” that rumbled through the streets of San Francisco and past the family’s delicatessen. He spent countless hours as a child drawing city maps (to scale) for his collection of Matchbox trams and buses. And during the age of lava lamps and flower power, his dorm room walls at U.C. Santa Cruz were adorned with transportation maps. Indeed, Rick had what he called “the transportation bug,” a condition that would only grow in time.

On the campus of U.C. Santa Cruz, however, Rick also developed an interest in journalism. He created the University’s first radio station, albeit unregistered with the FCC, and upon graduation headed to New York to study at the Columbia School of Journalism, where he was awarded the Pulitzer Fellowship. Returning to California, he started his career as a broadcast journalist with KGTV in San Diego. Here he helped pioneer live reporting in the Southern California market, and won two “Golden Mike” awards for his work. In 1977, Rick returned home to San Francisco as a reporter for KRON-TV. If Herb Caen was the voice of San Francisco, Rick Laubscher was certainly seen by some as the dandy of the city’s television news. Immaculately dressed in a three-piece suit, Rick reported on a number of historic events, most notably the assassination of Mayor George Moscone and Supervisor Harvey Milk. Rick knew both the victims and the killer, and his coverage of the tragedy won him an Emmy Award.

In 1980, Rick left broadcast journalism to embark on a new career as a public-relations executive with the Bechtel Group in San Francisco. Over the next two decades, he worked around the world on behalf of Bechtel, crafting communication programs for both the company and their international clients. In the process, he helped mend relations between San Francisco and its business community, fostering a network of associates that would open the door for a dual career in civic service.

Rick’s affinity for streetcars is matched only by his love for San Francisco. And for nearly forty years, while working for Bechtel and later in private practice, he undertook numerous projects to give back to the City by the Bay. He served on the executive boards of the Chamber of Commerce, SPUR, and the JASON Foundation for Education, and was the founding Chairman of the City Club of San Francisco, one of the first fully open business and civic organizations in the City’s financial district. Above all, he revamped Market Street Railway, the nonprofit that brought vintage streetcars back to San Francisco. What started with an idea among likeminded enthusiasts—Rick calls it a “Mickey Rooney / Julie Garland Moment” of “Why don’t we get the kids together and put on a show”—finally took root in the summer of 1983 with San Francisco’s Historic Trolley Festival. Its popularity and international acclaim quickly made the festival an annual event. And by 1995, streetcars once again became permanent fixtures on the City streets. As President and CEO of Market Street Railway, Rick guided this effort with unrelenting energy. He assembled a diverse cast of supporters, searched around the world to secure additional streetcars, and skillfully navigated the city bureaucracy to make his vision of permanent streetcar lines to San Francisco a reality. For the fourth-generation San Franciscan who excitedly watched the “iron monsters” rumble down Market Street as a kid, it was simply a labor of love.

This oral history offers a look at San Francisco through the eyes of one of its remarkable residents. From journalism to business and an astonishing array of civic endeavors, Rick Laubscher helped shape the city he called home.