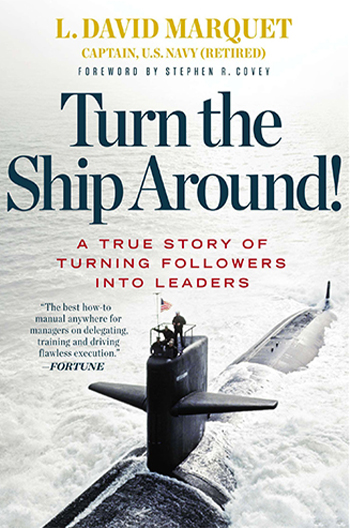 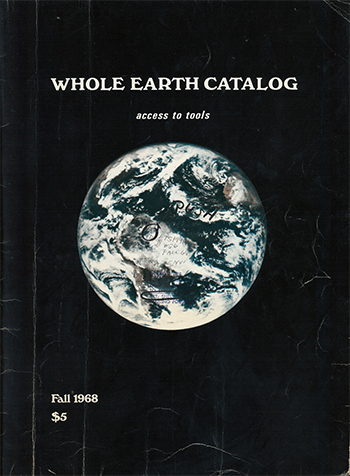 The Whole Earth Catalog is a publication full of marvels that reveals a time in the world when a generation was seeking and creating all the implements for living. While it was being published, it was about how to live and make a new world on planet Earth – with a vision that arose from the alternative ideologies and DIY zeitgeist of the 1960’s in California and elsewhere. The catalog called itself a “tool for living.” Its goal was to open up all the esoteric, folk, or professional knowledge in the world so everyone could learn how to create whole, sustainable lives.

It is a catalog in the sense that it has products, contact information, and vendors and publications small and large, but it’s maybe really a dream for everyday people seeking to learn how to do everything from living off the land to hunting mushrooms; to building dome houses; to handling emergency childbirth; to buying a space clock; to how to open communication with other intelligent life in the universe; or where to find cheap government surplus pickup trucks. It had mailing addresses for absolutely everything, like where to send away for earth for building houses; where to order a copy of The Très Riches Heures of Jean, Duke of Berry, or a copy of Man’s Role in Changing the Face of the Earth, etc., etc., etc. It also contained insets of short essays (by Ken Kesey, for one), and funky illustrations (by R. Crumb, for one) written by idiosyncratic people about the new kind of living. The catalog’s products and illustrations are magical for people chasing a world of love and food and machinery and freedom and…everything. Quoted purpose of the Whole Earth Catalog: “We are as gods and might as well get good at it.” 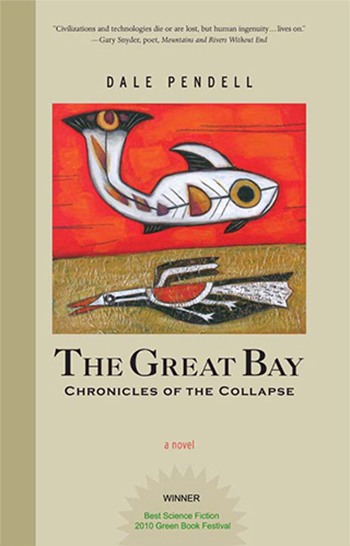 The Great Bay, a novel by Dale Pendell (1947-2018), opens with humanity on the threshold of collapse of the planetary anthropogenic infrastructure based on technology and fossil fuel. A global pandemic driven by a microbe with very high contagion and very high mortality has dramatically reduced the world’s population. The pandemic is over after the first few pages and the remainder of the book explores the aftermath – and what an extraordinary exploration it is. The geographic feature that gives the book its title, the Great Bay, formed over several centuries of melting polar ice, rising sea levels, and heavy rain. It is what will certainly happen in central California when sea level rises even a relatively small amount – a large inland bay will form, connected to the Pacific Ocean by way of the Sacramento River, present-day San Francisco Bay, and the Golden Gate. This Great Bay forms a geographic centerpiece and anchor for the stories of community that take place in that region, although the stories have universal significance. In the course of thousands of years, as human civilization reconstitutes after its precipitous collapse, it does so in smaller communities and without a focus on technology. Such a focus might not even be possible, given that the relatively easily accessible mineral resources we have enjoyed for centuries would have been exhausted. Thus, different aspects of the human psyche are cultivated, and what might be called spiritual or shamanic connections with reality are developed to a high level. Less technology, more shamanism, a resulting different metaphysical frame on the nature of mind, all contribute to a vastly different course for civilization, and a vastly different take on reality. 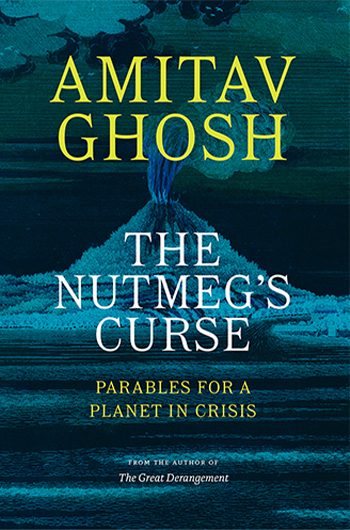 In this deeply researched and beautifully written book, Amitav Ghosh convincingly argues that our current planetary climate crisis is the predictable outcome of centuries of Western, resource-driven colonialism, along with the concomitant marginalization and sometimes extermination of Indigenous cultures. This geopolitical world order – which early on focused on the commodification of nutmeg and other spices, followed by tea, sugarcane, opium, and finally fossil fuels – continues to this day. Our current crises – of climate, community, and spirit – can be seen as the result of a mechanistic view of the Earth, one where nature exists primarily as a resource for humans to exploit, rather than as a living force filled with agency and meaning. The book ends on a hopeful note of bringing attention to the re-enlivening of nature, a way of thinking about the geosphere and biosphere that takes seriously the world views of the Indigenous cultures that have suffered tremendously in the course of this history. My favorite book of 2021. 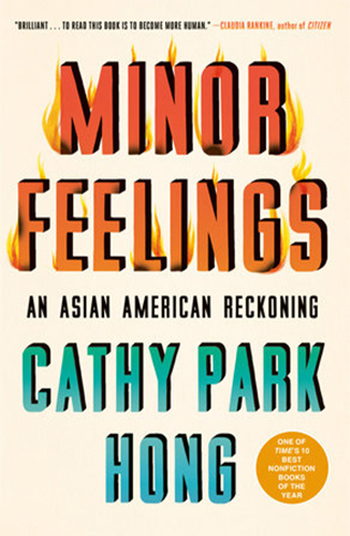 Like many poets turned essayists, Kathy Park Hong’s attention to language at the granular level makes her writing especially barbed in its critiques of American racism, and rich in observational detail. Her essay collection Minor Feelings: An Asian American Reckoning leads readers through layers of the “minor feelings” of the title, and helps readers to understand the complicated position Asian Americans occupy in a society that so often tokenizes or fails to understand the diversity of Asian American experience and identity. By engaging readers in thinking about the concept of shame and how it works, Hong also becomes a voice helping to liberate a community from feeling that same sense of shame. 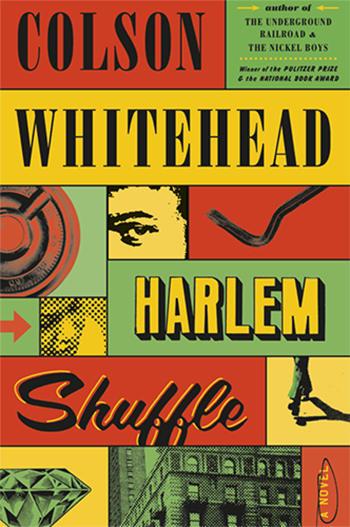 In Harlem Shuffle, Colston Whitehead’s protagonist, Ray Carney, takes readers through often intersecting communities in Harlem, in the late 50s-early 60s: into bars, laundromats, bakeries, and social clubs, through front doors and back doors, “doorways [that] were entrances into different cities—no, different entrances into one vast, secret city.” Carney owns a neighborhood furniture store, strives to move his family to a tonier apartment, and lives mostly on the straight and narrow, save a side gig as a fence. However, Carney’s world is upended when his cousin makes him an unwitting accessory in a jewel heist and lands him smack in the middle of trouble, entwined in a web of thieves, crooked cops, and mobsters. Increasingly, Carney sees fewer distinctions between the “straight” and “criminal” worlds.

Whitehead subverts the crime novel genre, blurring notions of “legal” and “illegal,” “just” and “unjust.” We root for Carney as he tries to save himself and his cousin and realize his ambitions. Along the way, Whitehead draws a map through Carney’s beloved Harlem—its history, characters, contradictions, triumphs, and enduring spirit. 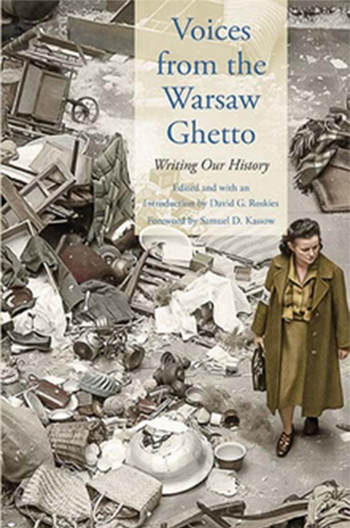 How does one bear witness to a community being destroyed? What Emanuel Ringelblum did in Warsaw in the early 1940s was to create a community of chroniclers. Folks from various walks of life–poets, rabbis, activists, and others–were brought together under the moniker “Oyneg Shabes” (Joy of Sabbath), and urged to write of the “ordinary” lives in the Warsaw ghetto, quite literally as the Nazis were attempting to exterminate Jewish communities across Europe. Life then was hardly “ordinary” but many daily events (horrific as they were) were captured in these essays; the manuscripts were then placed into metal milk cans, which miraculously were preserved until unearthed after the war. Nearly all of the essayists perished in the Shoah (Holocaust). This book provides a window into life in the Warsaw ghetto and includes jokes, drawings, stories, poems, and essays about tailors, children, teachers, smugglers…a general cross-section of society there. What makes this book so gripping is the immediacy of the essays. Ringleblum encouraged the essayists to write in the here and now: what is happening at this very moment. The hope was, and is, that hearing of the plight of Warsaw’s Jewish residents would help us all to prevent future atrocities; a task, I’m afraid, that has not been successful. 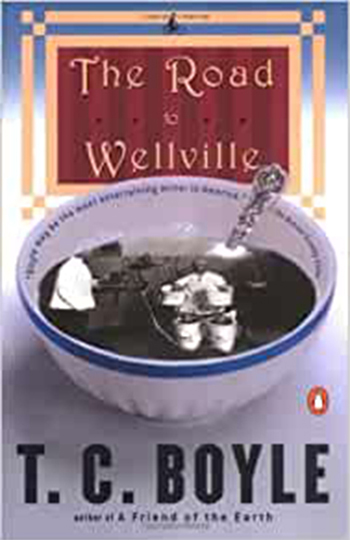 The Road to Wellville
TC Boyle

In the early 1900s a group of strangers meet in the breakfast cereal capital of the USA, Battle Creek, Michigan. There they find the “San” (Dr. John Harvey Kellogg’s sanitarium), where they seek optimum health and enlightenment. This satirical, quasi-historical piece of fiction takes a bite out of “wellness” communities, the idea of food as medicine, and cult-like following of diet and alternative medicine gurus, not to mention get-rich-quick schemes. It’s an American tale through and through–one that is as relevant today as it was at the beginning of the last century. 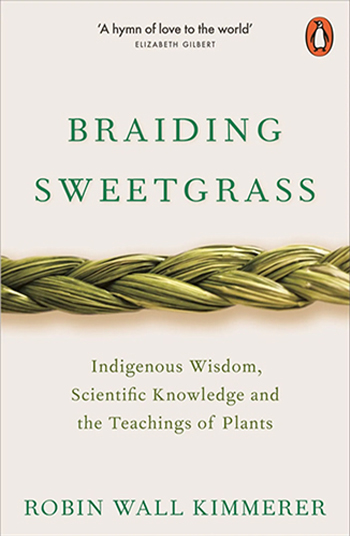 This beautifully written (and presented) book weaves stories of how our lives intertwine with the ecosystems around us and centers an Indigenous worldview that is often discredited in academia. It brings the reader on a journey requiring you to slow down and learn from the stories nature is telling us: that reciprocity is real and necessary. 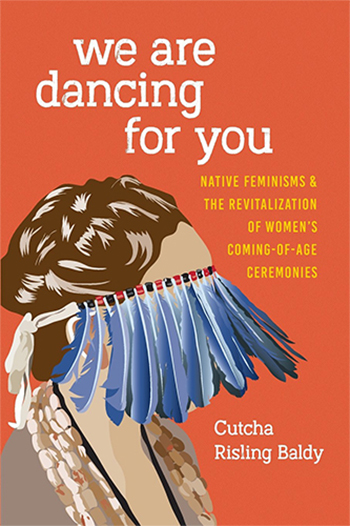 We are Dancing For You: Native Feminisms and the Revitalization of Women’s Coming-of-Age Ceremonies
Cutcha Risling Baldy

Dr. Risling Baldy’s Indigenous feminist voice speaks truth to power on difficult topics: California history and genocide, anthropology, and salvage ethnography. But through these recollections, experiences, and narrative evidence the triad goals of (re)righting, (re)writing, and (re)riteing history bring hope for the future.