It’s been a topsy-turvy couple of years. But it’s not the only time in recent memory that the world’s turned upside down. As the Omicron variant has once again derailed our path to normalcy, I decided to search the Oral History Center’s collection to see what our interviewees have described as topsy-turvy. Referencing the trivial to some of the most challenging times in recent history, those who used the adjective included household names like Chief Justice Earl Warren and California Supreme Court Justice Cruz Reynoso, as well as artists, urban planners, venture capitalists, and Rosie the Riveters. Topics raised include the rise of Hitler, atomic weapons, the Great Depression, educational equity, campaign finance, messy houses, and downtown San Francisco. Here are the results.

See below for a detailed description of how to search our collection by a keyword like topsy-turvy.

The rise of Hitler

“The world was beginning to be topsy-turvy. That was around 1939, when Hitler was not being very friendly.”

During World War II, Betty Hardison worked at the Mare Island Naval Shipyards for the department responsible for repairing ships damaged during Pearl Harbor. Here she reflects on why she gave up her dream of university and journalism and took her first job.

When it was time to go off to school, I sold my clarinet and I went to Armstrong Business College in Berkeley. . . . It no longer exists, but it was a very prominent business school at the  time. I took secretarial and all phases of business. But at that time, then, the world was beginning to be topsy-turvy. That was around 1939, when Hitler was not being very friendly. . . . Journalism was a strong goal. I had been editor of the yearbook and things like that, so I thought that I wanted to go to the university and take journalism. But then with the world being turned upside-down, I went for my first job.

Related discussion within the interview: educational expectations for women, life in Calistoga, California during the Great Depression

“He found San Francisco to be completely topsy-turvy, vertiginous, and absolutely mad.”

Robert Riley, the curator of media arts for the San Francisco Museum of Modern Art, recalled the inspiration for artist Steve McQueen’s work, Drumroll. McQueen had visited San Francisco during the exhibit of his work, Bear, in the early 1990s.

When he was in San Francisco, he experienced the hurly-burly, topsy-turvy development of the downtown—there was a lot of construction when he was here. There was traffic mayhem. . . . He found San Francisco to be completely topsy-turvy, vertiginous, and absolutely mad. He work-shopped an idea here of putting a camera lens into the drain hole of a striped orange construction barrel, which he borrowed. He’s a large man. He decided to start pushing the barrel down the street and just telling people to look out.

Related discussion within the interview: acquisition of Steve McQueen’s work, Bear; the development of Drumroll

“Was that the mannequin whose head was cut off? Do you remember?”

Jean Fuller, director of women’s activities of the Federal Civil Defense Administration, 1954–58, was present at an atomic bomb test explosion in May 1955, dubbed Operation Cue. Conducted by the Atomic Energy Commission outside of Las Vegas, the test was designed to determine how the blast would affect people (represented by mannequins), food, and various structures. Looking at before and after photos of a test home, Fuller discusses the results with her interviewer, Miriam Stein.

Fuller: Now, here’s the before scene of that living room where we saw the man all topsy-turvy. As you see there were draperies and there were Venetian blinds. Now, had they had the draperies pulled completely across, the blinds probably would not have done quite as much damage but they were only as people normally leave them.

Stein: Was that the mannequin whose head was cut off? Do you remember?

Fuller: No, he was upside down here someplace.

Stein: That’s right. He was hanging over a chair.

Fuller: Yes, but he undoubtedly would have been dead.

Related discussion within the interview: detailed account of the atomic test

“Some poor son of a gun with no money but with a great issue will come along, and he’ll just turn them topsy-turvy.”

Earl Warren, who attended UC Berkeley as an undergraduate and also received his law degree from Berkeley Law, was governor of California and chief justice of the United States Supreme Court. Here he discusses campaign finance with his interviewer, Amelia Fry, and an editor from Doubleday and Company, Luther Nichols, who was assisting Warren with his autobiography.

Nichols: I think Alioto spent half a million dollars—

Warren: More than that.

Warren: Well, I’ll tell you. Of course, it’ll go along that way and then some poor son of a gun with no money but with a great issue will come along, and he’ll just turn them topsy-turvy. Now, you take that fellow who was elected—was it governor or senator—in Florida this year [1971]. He was a little country lawyer, Chiles, his name is— He’s a little country lawyer, he had no money of any kind to spend, but he told them he was going to start in the north of Florida and was going to walk clear through the state making his campaign. And, by George, he did. He’d arrange every way that— To start in the morning where there was a television station, and they’d pick him up there, say something about him, and he’d always stop at a television station at night. [Laughter] He got publicity that way and never spent a nickel on it, and he went all through the state, and he beat the whole outfit. [Laughter]

Fry: And he got all that free TV time!

Warren: Oh yes, he got all that free TV time.

Fry: He must have had a million dollars of TV time!

Warren: [Laughter] And never paid a dime for it!

Related discussion within the interview: decision to run for governor, campaign finance

“Somehow those parents, when they have come to a meeting, have felt uncomfortable, as my parents did when they went to a PTA meeting.”

Cruz Reynoso, who received his law degree from Berkeley Law, was the first Hispanic California State Supreme Court justice. Here he reflects on race relations and parental involvement in schools.

I will tell you a story because it turns things topsy-turvy. I may have told you about this. I was invited to go speak on a Saturday to a parent-student group in a school in the Los Angeles area. When I got there, I noticed that practically everybody involved was Spanish-speaking, and a great majority of the kids there were there, but the leadership of the PTA and practically everybody in charge was Latino. So I asked, “Is this an entirely Latino school? Do you have some other folk?” And they said, “Oh yes, about 20 percent of our students are Anglo.” And I said, “Well, where are the Anglo parents?” And they said, “We don’t know. We keep inviting them; they just don’t come.” I was bemused because I have heard that story told a hundred times about Latino parents by Anglo parents, “You know we keep sending these notices. They don’t come. They must not be—” They don’t say this, but the implication is “they must not be interested in education or must not be interested in their kids.” Well, I just said, “Maybe you ought to do something more so they feel comfortable when they come to these meetings and so on.” Something is not quite right when 20 percent of the parents don’t come to a Saturday function that is supposed to be good for everybody. I don’t know what they have done right or wrong, I really don’t. I nonetheless have the absolute sense that they haven’t done enough. Somehow those parents, when they have come to a meeting, have felt uncomfortable, as my parents did when they went to a PTA meeting. And we as human beings are smart enough to be able to figure things out on how to make those folk feel more comfortable and so on.

Related discussion within the interview: affirmative action generally, and in particular at UC Berkeley

“Others are saying the world has kind of gone topsy-turvy today—I don’t mean today, but up until recently.”

Paul “Pete” Bancroft was an early participant in the venture capital industry and president, CEO, and director of Bessemer Securities Corporation. Mr. Bancroft also devoted considerable time to The Bancroft Library, which was founded by his great grandfather, Hubert Howe Bancroft.

It finally evolved, unfortunately, to the point where the venture capital partnerships were investing so much money that with the fees they were getting, the 1 percent to 2.5 percent of the assets, that they were making more money that way than they were on the profits that were being made when the investments were sold. It meant that they were really starting to lose sight of really making money on the companies they were investing in. Which is why Arthur Rock and others are saying the world has kind of gone topsy-turvy today— I don’t mean today [2010], but up until recently.

The de Young Museum. . . and the Monterey Bay Aquarium

“Who can hate a baby seal?”

The de Young Museum harkens back to the Midwinter Exposition of 1894, and then opened as the de Young Museum in 1895. It grew topsy-turvy over the years and was badly damaged in the 1989 Loma Prieta earthquake. In fact, they built a steel exoskeleton around it to keep the walls from falling down. It had never been a great museum in terms of collection or building. And they are related. . . .

The [Monterey Bay] Academy was three or four years behind the de Young, so they got to learn from the mistakes, or at least knew what they were going to be up against when they started. Like the de Young, it was a building that had grown like topsy and was a mess of a building even before the earthquake. And then in the earthquake, pipes broke, which isn’t very good if you’re an aquarium. . . .

So in March 2000—this was three-and-a-half years after the first de Young bond vote—there was an $87 million bond on the ballot for the Academy. They needed 66 2/3 percent “yes.” They got sixty-seven. Phew. Just sneaked by. It was a different call than “old art.” It was “kids.” Their poster for the “yes” on the measure was a baby seal. Who can hate a baby seal?

Related discussion within the interview: California’s proposition system, the adaptability of Golden Gate Park, and the evolution of parks and recreation since the 1800s.

You can find the interviews mentioned here and all our oral histories from the search feature on our home page. Search by name, keyword, and several other criteria. From our home page, I entered topsy turvy in the search box and clicked search. (I did not get a different result with/without a hyphen.) There were 18 total results, including when the interviewer used the term or it appeared in an introduction.

When you get to the results page, you might not initially see any oral histories. This is because the “full text” feature is off by default. On the results page, toggle on “Fulltext search.” A number of oral histories will populate on that page in a list. Please note that sometimes I get better results when I change the default “all the words” to “partial phrase.” 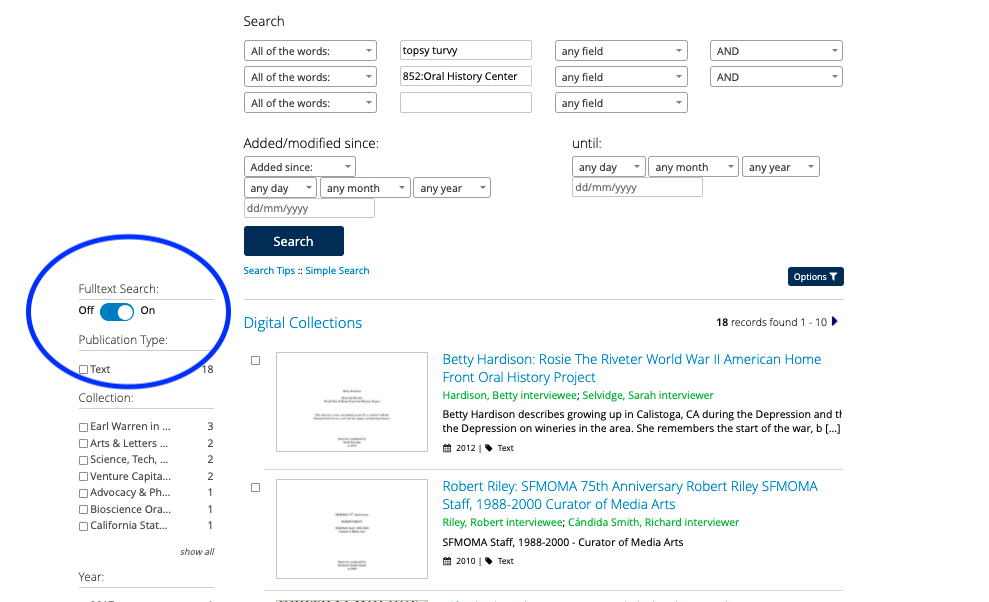 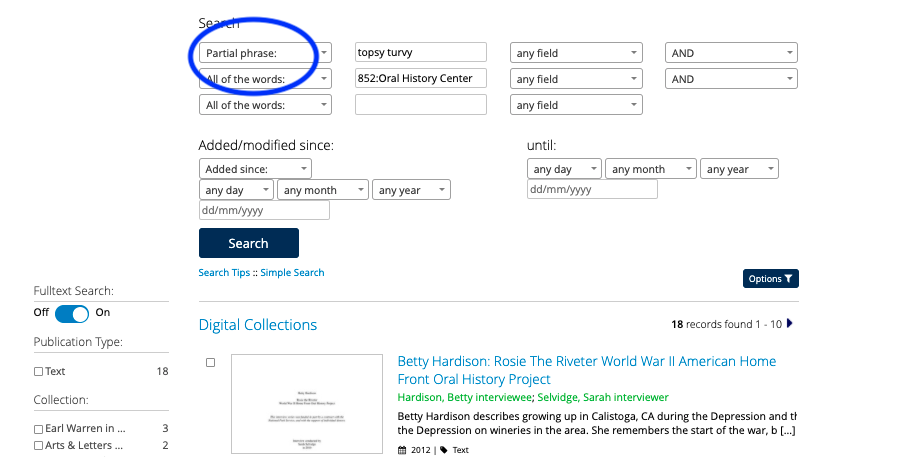 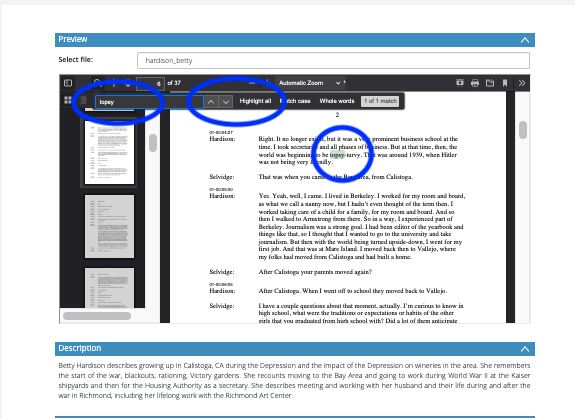 Jill Schlessinger is communications director and managing editor for the Oral History Center. She received her doctorate in history from UC Berkeley.

About the Oral History Center

The Oral History Center of The Bancroft Library has interviews on just about every topic imaginable. We preserve voices of people from all walks of life, with varying political perspectives, national origins, and ethnic backgrounds. We are committed to open access and our oral histories and interpretive materials, including our podcasts and articles, are available online at no cost to scholars and the public.