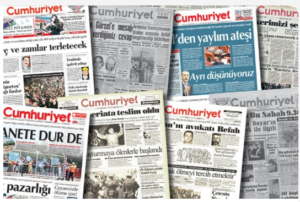 The Library recently acquired the Cumhuriyet Digital Archive, which provides access to the complete run of the newspaper since its establishment in 1924. This information is provided on the digital platform: “…Cumhuriyet (“The Republic”) is the oldest secular Turkish daily newspaper and is widely considered one of the last remaining opposition newspapers in Turkey. Founded by journalist Yunus Nadi Abalıoğlu at the initiative of Mustafa Kemal Atatürk, Cumhuriyet was the first newspaper of the Turkish Republic and promoted a belief in democracy, secularism and the rule of law. According to the newspaper’s editorial principles: Cumhuriyet is an independent newspaper; it is the defender of nothing but the Republic, of democracy in the scientific and broad sense. It will fight every force that tries to overthrow the Republic and the notion and principles of democracy. It will endeavor for the embracing by society of the principle of secularism along the path of “Enlightenment” ushered in by Atatürk’s revolution and principles.”