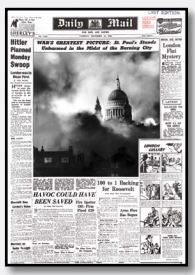 Trial access to the digital archives of these two London newspapers is available until June 18, 2020.

Described by the New Yorker as “the newspaper that rules Britain,” the Daily Mail has been at the heart of British journalism since 1896, regularly changing the course of government policy and setting the national debate. It currently boasts a circulation of over 2 million, and its website is the most visited news site in the world. (See the fact sheet)

Started in 1903, the Daily Mirror was influential in changing the course of British newspapers in the second half of the twentieth century, becoming Britain’s bestselling daily newspaper by 1949. Editorially left-leaning and populist to reflect the views of its target working class audience, it offers a counterpoint to the more conservative newspapers that dominated the late nineteenth- and early-twentieth centuries, such as The Times and The Telegraph. (See the fact sheet)