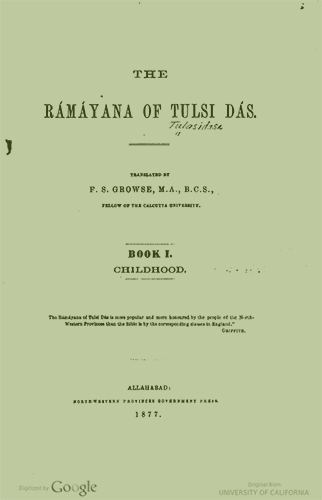 The two great Indian epics, the Mahābhārata and the Ramayana, dominate South Asian cultures in ways that few other literary productions do. Both epics have to do with the heroic exploits of the human incarnation of the Hindu deity Vishnu, one of the most widely worshipped gods of the Hindu pantheon. The Ramayana deals with the story of King Ramachandra, the seventh incarnation of Vishnu, who came down to Earth to establish just rule and a harmonious society.

King Rama is not only the ideal monarch and warrior but also embodies the virtues of justice, wisdom, patience, and perseverance. He is an obedient son, a generous brother, and a caring husband. His rule became synonymous with justice and good governance so that throughout the centuries the expression rama rajya (Rama’s rule) has been used to describe the ideal government.

The most famous version of the Ramayana is the Sanskrit composition of Valmiki known as Valmiki’s Ramayana. It has the status of a sacred text and is highly revered. It is also a masterpiece of Sanskrit literature. There were many versions of the Ramayana composed subsequently, both in Sanskrit and other languages. Some became more popular than others, but one is justified to say that after Valmiki’s Ramayana, the version that is most famous is the Ramacaritamanasa created in the Awadhi dialect of Hindi by Tulasidasa in the 16th century. In fact, Tulasidasa’s Ramayana quickly garnered wide popularity and its recitation became part of the worship service of many sects and religious traditions of Vaishnava Hinduism, especially after the introduction of the printing press in the early 19th century. Its communal recital, often set to a distinctive tune, continues to this day. Tulasidasa was himself an ardent devotee of Lord Rama and in expressing his love and reverence for the divine incarnation in beautiful poetry he managed to create one of the greatest poetic works of Hindi literature.

Tulasidasa was born in the region of Avadh in what is now eastern Uttar Pradesh in modern India. There is disagreement about his date of birth, but scholars generally consider it to be around 1532 CE. Traditional accounts state that he was a Brahmin by caste and was initiated into a mystic and ascetic lineage devoted to the loving worship of God through the incarnation of Rama. He is supposed to have spent time as a student with various sages and teachers in Banaras where he learnt the classical Sanskrit texts as well as Vaishnava scriptures. He decided to compose a Ramayana in Awadhi for the edification of the general population, and thus, composed the Ramacaritamanasa, The Lake of the Deeds of Rama. He composed a number of other works as well but the Ramacaritamanasa remained his magnum opus. He died in 1623 in Banaras.

When he set about composing the Ramacaritamanasa, Tulasidasa had a long tradition of composing Ramayanas to look up to going all the way back to Valmiki. At the same time, he was well aware of the literary styles and compositions of his own time when the beginnings of Hindi literature had already been made and a corpus and canon were slowly but steadily evolving. Tulasidasa was to leave his mark on this evolution.

Tulasidasa followed the conventions of chanda prosody that had been the hallmark of Sanskrit poetry and was also followed in other languages, especially for works in Aparbhramsa, the medium of literary production before the rise of Hindi. He also might have been inspired by the metrical structure of the premakhya, a genre of love ballads popular in his days, in creating the basic form for the Ramacaritamanasa. The work is composed in regular arrangements of caupais (quatrains) and dohas (couplets) and he used a different meter for every section of the work.

Tulasidasa used his considerable literary skills to retell the story of the struggles and ordeals of Lord Rama, his brother Lakshmana, his wife Sita, and his devoted disciple, the monkey god, Hanumana, as they faced family feuds, exile, and an epic war against the demon king, Ravana, who had kidnapped Sita, until they returned victorious and vindicated to their capital, Ayodhya, to establish a just and prosperous kingdom.

Ramacaritamanasa is not just a skilled literary retelling of the ancient epic in the charming Awadhi dialect but is redolent with Tulasidasa’s own loving devotion to Lord Rama which seeps through its every line. Perhaps that is why millions of devotees of Lord Rama continue to use it to express their own love and devotion in prayer.

Hindi has been taught UC Berkeley since the late 1960s. Currently, there are two Hindi lecturers. Usha Jain has authored books on Hindi language instruction, including Introductin to Hindi Grammar (1995), Intermediate Hindi Reader (1999), and, Advanced Hindi Grammar (2007). The other instructor is Dr. Nora Melnikova whose interests include second language teaching, modern Theravada Buddhism, and the Early Modern languages and literature of North India. She has also translated Mirabai’s medieval Hindi poems and Erich Frauwallner’s History of Indian Philosophy into Czech.