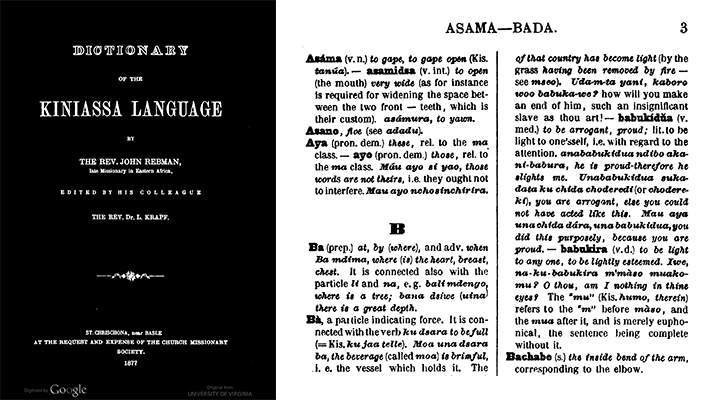 “My study of the Kiniassa was to me such a continual intellectual feast, that days and weeks fled so quickly as I never remembered they had done before, and it was with great reluctance that I tore myself from it when we had to get ready for our voyage to Aden.”
— Reverend John Rebman

With over 2,000 vernacular languages, sub-Saharan Africa includes approximately one-third of the world’s languages.[1] Many of these will likely disappear in the next hundred years, displaced by dominant regional languages like Chichewa. Also known as Chinyanja or Kiniassa, Chichewa is spoken in west-central and southwest Africa. In total, the language claims nearly 10 million speakers across the region. It is an official language — along with English — in Malawi and is officially recognized in Zambia and Mozambique where it is known as Nyanja. Chichewa is part of the Bantu branch of the larger Niger-Congo phylum. Linguistics and archaeologists suggest that these languages began in the grasslands of northwestern Cameroon and north-eastern Nigeria over two thousand years ago and spread across central and southern Africa through a combination of migration and conquest.[2]

The Dictionary of the Kiniassa Language, compiled by the reverend Johannes Rebmann brom 1853-54 and posthumously published in 1877, was the first extensive written record of the Chichewa language. It is representative of the fairly prolific publishing output of European missionaries — principally religious (bible translations, hymn books, etc.) or grammar and vocabulary texts —  during the early colonial period.

These types of texts — especially the grammar and vocabulary texts — can offer a unique vantage point from which to view the imaginative nature of work that is otherwise often viewed as static. For example, in works of comparative religion, scholars can use these creative texts to gain insight into how missionaries grappled with words to accurately define religious concepts such as “sin” to serve their proselytizing purposes. Ultimately, old words were re-defined or altogether new words were crafted to meet the present need.