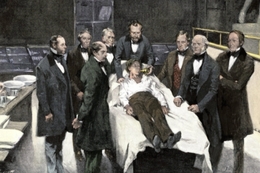 The Library has recently acquired a new module in Nineteenth Century Collections Online: Science, Technology, and Medicine: 1780-1925, Part 1. This includes:

Academy of Natural Sciences of Philadelphia: Minutes and Correspondence
Minutes, correspondence, archival collection summaries, membership lists, and donation ledgers from the academy’s founding in 1812 until 1924 (and 1925 in the case of the minutes).

American Medical Periodicals
A collection of serials covering the entire scope of medical history in the nineteenth-century United States.

Collections of primarily monographs from the 19th century, sourced from the Huntington Library.
Astronomy and Astrophysics
Electricity and Electromagnetism
Civil Engineering
Color Theory and Practice
Evolution and the Origin of Species
Mathematics

Reports of Explorations Printed in the Documents of the United States Government
Throughout the 19th century the U.S. government sent out a wide variety of missions to explore and document the country, its coastal waters, and beyond. This collection includes primarily monographs and reports held at the Library of Congress.

Scientific and Technical Periodicals from the Royal Society of London’s Catalogue of Scientific Papers 1800-1900
A collection of international publications held at the Academy of Natural Sciences of Drexel University.