Liam O’Donoghue is the host of the local history podcast, East Bay Yesterday. He tells the story of the region through baseball teams, earthquakes, grizzly bears, martial arts, activism, and music. We caught up with him recently to chat about how the show got its start, why history can help create empathy, and how he hopes to incorporate oral history. If you haven’t listened to the show yet, check it out on iTunes or head to his website. 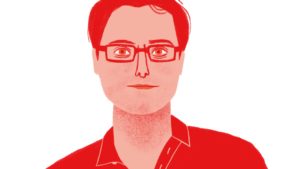 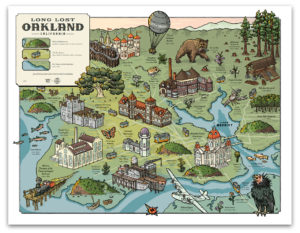 Q: How did you get your start in podcasting?

My favorite aspect of journalism has always been interviewing people. I started my first ‘zine when I was 15 years old and published interviews with musicians from Chicago’s underground punk scene. Throughout my career as a print and online journalist, it always saddened me that 95 percent of most interviews never make it into the final article. I gravitated toward podcasting because the format allows interviews to really drive the narrative.

I started teaching myself basic digital recording and audio editing skills in spring of 2016 — mostly by watching tutorials on YouTube and reading “how to” articles on sites like Transom.org. I launched the first episode of East Bay Yesterday in September 2016 and have published nearly 40 episodes since then.

Q: What got you interested in East Bay history?

I started noticing a pattern: whenever I would talk to a longtime East Bay resident, they would always tell me incredible stories that I’d previously been completely unaware of. It made me realize the need to capture, share and celebrate these histories. Because of the rapid displacement of elders and people of color in the East Bay, I felt a huge urgency to devote myself to this project. The kinds of stories I want to collect are slipping away every day.

At the same time, there’s a big influx of newcomers to the East Bay, so I felt it would be useful to present local history in an accessible way. One of the effects of gentrification can be the erasure of previously existing cultures, so a goal of the podcast is to educate recently-arrived residents about what was here before they arrived.

A rather sad and ironic complaint I’ve often heard from longtime Oaklanders is that their new neighbors look at them like they — the Oakland “natives” — don’t belong. For example, I interviewed a Black man who had been using his front yard as a place to practice his martial arts for several decades. After white people started moving onto his block, somebody called the police on him and said he was “threatening.” My hope is that newcomers will have more empathy for longtime Oaklanders if they get to know them better, which is something the stories on my podcast strongly encourage.

Q: What are some of the reoccuring themes that you’re finding in your research?

The old cliche about “history repeating itself” is so true. There have been so many times that I’ve read old newspaper articles that feel like they could’ve been written yesterday. For example, the kind of language that’s being used to describe Oakland’s current boom is eerily similar to predictions about Oakland’s economic destiny in articles from the early 1900s or World War II or the first dot-com bubble, etc. Of course, most of these grandiose predictions fizzled out, which leads to some interesting conclusions when considering the outcome of this current cycle.

Another common theme is longtime residents’ apprehension about newcomers. The racial and socioeconomic dynamics vary, but any time there’s a large influx of people, the locals usually aren’t very thrilled. Some of this is attributable to racism, like when thousands of African Americans moved to Oakland seeking jobs during the World War II industrial boom. However, white “Okies” fleeing the Dust Bowl during the Great Depression were also vilified by many Oaklanders.

Q: How have you developed your podcast production process?

It’s an ongoing learning experience! I’m constantly trying to improve my craft by listening to shows like How Sound, a podcast about “radio storytelling,” reading books like Out on the Wire: Storytelling Secrets of the New Masters of Radio, and hanging out with other people in the Bay Area’s extremely friendly and supportive world of audio/radio producers. Getting to co-produce a story with the nationally-syndicated NPR program Snap Judgement was a big help because it finally allowed me to see “how the professionals do it.” It was my first time recording in a real studio instead of my bedroom.

Q: What kinds of archival material have you used?

My shows are usually built around original interviews, but I’m always really excited when I get to incorporate archival audio, because it adds a whole different vibe to the story— like the listener is really travelling back in time. Here are a few examples:

-In the episode about how living in Berkeley was one of the most transformative times in the life of Richard Pryor, I incorporated clips from his (short-lived) KPFA radio show and from his local standup comedy routines.

-In the episode about the Cypress Freeway collapse in West Oakland, I used audio from the California Highway Patrol’s radio communications describing the post-earthquake conditions, calling for emergency backup, etc.

-In an episode about the Oakland Community School, which was established and run by the Black Panther Party, I used a short clip from a 1977 TV documentary featuring this quote from Huey Newton: “They used to serve cookies at the primary school, but if you didn’t have money, you had to put your head on your desk until the other kids were done. I thought that was a problem. At the Oakland Community School, everybody eats.”

Q: Have you used any oral history interviews? How do you plan to incorporate oral history as you move forward?

There’s been surprisingly little coverage of Berkeley’s status as “America’s first sanctuary city.” For my research on that topic, I relied heavily on oral history interviews conducted by Eileen M. Purcell for the Graduate Theological Union in Berkeley. Specifically her interviews with Rev. Gus Schultz and Bob Fitch, who were both pivotal figures in this movement are now deceased.

More recently, I used interviews conducted by Sue Mark, a local artist and historian (although she prefers the term “cultural researcher”), for an oral history project about Oakland’s Golden Gate neighborhood. She used these interviews to produce a short documentary a few years ago, but most of what she recorded had never been shared. I was honored and excited that she gave me her tape and transcripts to create an episode of East Bay Yesterday based on these interviews.

Moving forward, I’m extremely interested in incorporating interviews from the Oral History Center into future episodes of East Bay Yesterday. I’m a bit intimidated by the vast scope of your archives, but I’ve got a few ideas that I’m starting to explore…

I love meeting people that I probably never would have met if I wasn’t making this podcast. For example, I was recently invited into the clubhouse of the East Bay Dragons, one of the world’s oldest Black motorcycle clubs. Getting the opportunity to sit down and have a long, emotional, enlightening conversation with a few of their members was an incredible experience.

Q: What are the top three episodes that you recommend for a new listener?

Besides the episodes I’ve already mentioned, these three are a few of my favorites:

Q: What podcasts are you listening to?