From the Summer Institute to the Presidio

Every year, as the sun burns bright over our quiet campus, we welcome a new cohort of Advanced Oral History Summer Institute participants, eager to spend a week immersed in all things oral history. August is an exciting time of year for us at the OHC. We get swept up in the enthusiasm of those who join us to learn; we love hearing people discuss their projects, make connections, and talk through issues they face.

The questions that the crowd ask throughout the week, each day building from the previous, are always thoughtful and make me think deeply about how to push my own work forward. These conversations take many forms and cover many topics. This year, there were many projects about events in the recent past, or that focus on issues that never seem to fade, like mass violence and marginalized communities. The questions that drive these projects are important to think about, research, record, archive, and preserve, and seep into the heart of my own interviews.

I found particular inspiration in the topics relating to trauma narratives because of a currently project that I’m working on with the Presidio Trust of San Francisco. For the past several months, I’ve been collaborating with their historian, Barbara Berglund Sokolov, on a series of interviews with people who have spent time at the Presidio in one capacity or another. Most recently, we have been focusing on the Presidio 27, a group of twenty-seven men—all of whom went AWOL during the Vietnam War and were incarcerated in the Ft. Scott stockade after being caught—who staged a mutiny on October 14, 1968 after one of their fellow inmates was fatally shot by an Army guard.

The project is ongoing, and we’re aiming to interview as many people as possible, including mutineers, guards, lawyers, media, protestors, and prisoners who arrived at the stockade in the wake of the mutinee. Many of the narrators who we’ve interviewed so far were traumatized by their involvement, and this requires careful consideration about best practices, and self-care. I’ve had to think through how best to support our narrators so as not to re-traumatize them, or Sokolov, or myself, in an environment that doesn’t feel threatening.

In preparation for these interviews, I spoke with the Director of the Presidio’s Veterans Program, who generously talked with me through the project and some red flags to be aware of, many of which he suggested that I could glean from the pre-interviews. Did the narrator mention a social or support network present in their lives? Did they seem responsive to the interview process? Were they overly emotional or withdrawn? Another issue was the interview setting. Several of the narrators had been imprisoned in tiny cement cells with no access to the outdoors for days at a time. Conducting the interviews in a basement conference room without windows was a bad idea, while holding them in open room with big windows facing the water pointing toward the North Bay was a better option. Transparency with our interview process, outline of questions, and final goals of the project felt more important here than other projects because the stakes felt higher. We also had to make sure that we asked questions that weren’t triggering and built in time for self-care after the interview.

While I was only just beginning this project when the Summer Institute kicked off last month, it gave me the opportunity to ponder the cornerstones of our work as oral historians, with a responsibility to our narrators, and ourselves. I heard our participants pose questions about their interviews involving trauma, and how they might approach this. I learned a lot from them, and feel lucky to have been privy to their thoughtfulness.

I’ll be writing more about this project–particularly about the interview arc and self-care, over the coming months, with new questions, considerations, and reflections. Stayed tuned. 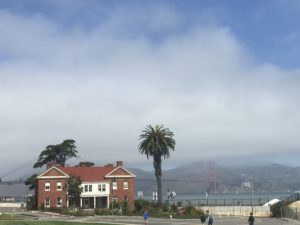