Hailie O’Bryan, one of the student workers at the OHC, attended the 2018 Rosie Rally Homefront Festival in Richmond, California in August. She tells us her first Rosie Rally, what she learned, and what we can learn.

My name is Hailie O’Bryan and I am a student worker at the Oral History Center. My recent experience at the Rosie Rally has undoubtedly been one of the biggest highlights during my time at the OHC.

When I first joined the OHC staff a little over a year ago, I was instantly introduced to the

Rosie the Riveter World War II Home Front Project that was being managed by David Dunham. While for I did very little work that was directly related to that project during my first several months, I heard the project mentioned several times a day. When I began to work on the OHC’s interviews, I was mesmerized by the significance of them, something that I had never truly considered before. These documents took stories straight from the mouths of living legends and immortalized them in the archive. Needless to say, when I was finally brought on the work on the Rosie the Riveter World War II Home Front Project, I was unimaginably excited. I would get to read, listen to, and watch someone give a first hand account of an era I had always held a deep fascination for.

I was not let down. The stories and accounts that I have been exposed to are unlike anything else I have ever experienced. These men and women have such an amazing energy about them that it almost flows from their oral histories. I began to do more work with the Rosie project, namely organizing and taking inventory of the database, syncing audio and video, and indexing and sequencing video interviews, exposing me to many different people with different stories.

When I was given the opportunity to represent the OHC at the 2018 Rosie Rally Home Front Festival in Richmond, CA, I was elated. I dressed up as Rosie the Riveter herself (or, my interpretation because I unfortunately do not own coveralls) and spend the day with my coworkers telling people about the wonderful interviews, including the unveiling of synced video interviews or the entire Rosie the Riveter World War II Home Front Project database which is going to be done by the end of this year.

At one point in the afternoon, the names of surviving Rosies were announced and they came onto a stage. I was awed by the fact that  I was looking into the face of living, breathing history. My coworkers shared my sentiment because when I asked OHC student worker Gurshaant Bassi about her opinion of the rally,  she said, “The rally brought history into being. It is essential to read the stories of the women who broke down the barriers we all benefit from now.” Aamna Haq, another one of my OHC co-workers, also shared this opinion. “It was a wonderful experience to learn about the importance of the Rosies in the World War II Era and the role they continue to play in the modern women’s empowerment,” she said.

Gurshaant and Haq are absolutely right. Given the progress of women’s rights since the 1940s, it is important to acknowledge and remember that women did not always have the same privilege as they do today. The Rosies laid the groundwork for woman’s role in the workforce. It is of tantamount importance that we remember the challenges they faced as they were doing this, especially as the years go on and we lose more of these amazing people.

I left the rally left feeling an enormous sense of gratitude towards the Rosies. After nearly 80 years, these women remain legends.To see them beyond the poster was an incredible experience for all of us.

Women still have much progress to be made, but by learning about the lives of these brave women we can remember that progress does not come easy. It is challenging but strikingly necessary. The Rosies chose to persevere amidst the pushback they experienced when they entered the workforce. We must do the same. In this way, the stories of the women involved in the Home Front Project are not of the fleeting past, but the stories of every woman having to prove their right to take space. In this way, we can recognize the stories of Rosies as our own. We are all Rosie. 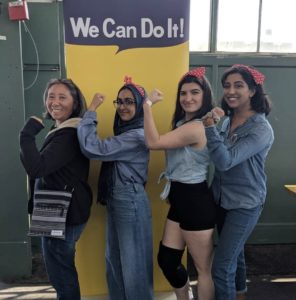 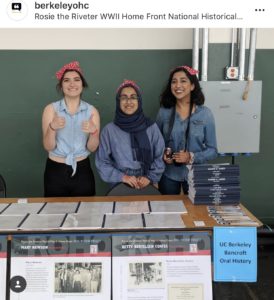