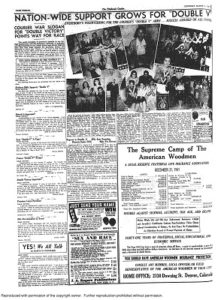 This important African-American press title was founded in 1910 by Robert Lee Vann. At first the paper focused on local interests, but later addressed the social concerns that arose due to the influx of African Americans to Pittsburgh during the Great Migration. Vann used the paper as a platform to encourage prominent African Americans to serve their community; to promote education; and to counter the “negative coverage in the mainstream press by emphasizing African American achievement.”