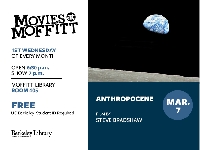 A Working Group of international scientists is deciding whether to declare a new geological epoch — the Anthropocene — with the Earth shaped more by mankind than nature. Its members tell the story of the Anthropocene and argue whether it’s a tragedy, a comedy, or something more surreal. With archival footage, award-winning stills and interviews, [the film] proposes a common secular narrative for mankind but leaves viewers to decide how we should write the ending.

Open to audiences: Graduate & Undergraduate Students
Must have a UCB student ID for entrance.