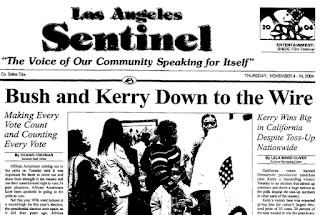 A fairly recent edition to the Library’s collection of ProQuest historical newspapers is the Los Angeles Sentinel, with an almost complete run from 1934-2005. The Sentinel was established in 1933 by Col Leon H. Washington who began his career in newspapers at the The California Eagle, the oldest black newspaper in the state. The Sentinel started out as a free-circulation publication, but within a year readership increased enough for Washington to turn it into a subscription-based publication, soon rivaling The California Eagle in prominence and readership. To to this day the newspaper puts emphasis on issues concerning the African-American community and it’s readers.