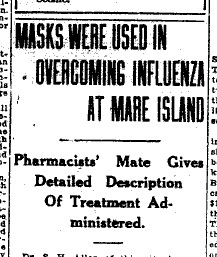 The American Influenza Epidemic of 1918-1919: A Digital Encyclopedia started as a collaboration between the University of Michigan’s Center for the History of Medicine and the United States Centers for Disease Control and Prevention (CDC). The purpose was to study the non-pharmaceutical interventions in American cities during the 1918-1919 influenza epidemic to determine what lessons could be learned from that experience.

After the initial results of the investigation were published, the researchers continued to build on their work. Using primary source materials gathered from libraries and archives across the country, they developed narrative essays on fifty cities, “exploring the story of influenza’s arrival in each community and the havoc it caused, [and] documenting the civic response, the political and economic ramifications, and, in every community, the heroism and courageousness of doctors, nurses, and countless volunteers who gave their all to fighting the epidemic.” In addition, they solicited articles from historians of public health and experts on virology on aspects of the epidemic. The anthology of essays, articles, and primary sources are co-located in this extensive online resource.