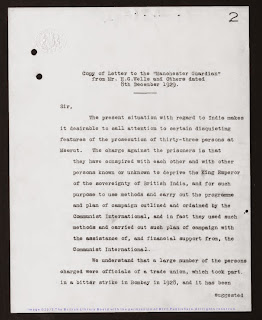 In Spring 1929 a group of labor leaders and trade unionists were arrested and charged under section 121-A of the Indian Penal Code (Act 45 of 1860) for “conspiring to deprive the King of His Sovereignty of British India.” Labeled by the British government as Bolsheviks, only a few of the men were members of the Communist Party, which at the time did not have a strong presence in India. The preliminary proceedings, subsequent trial, and appeals together lasted four years, during which the accused garnered much public sympathy and the Communist movement in India gained more support.

The Meerut Conspiracy Trial, 1929-1933, a collection contained in British Online Archives, includes documents drawn from the British Library, Labour History Archive & Study Centre and Working Class Movement Library. They include India Office records, personal papers of one of the accused, papers of a Secretary of the Labour party that show widespread support of the accused, and a collection of books and pamphlets related to the trial.