The Library has recently subscribed to six new databases from Brepols – distinguished publisher of works in the humanities from Antiquity to the Early Modern period. Among the new databases is the Bibliographie de civilisation médiévale (BCM) which indexes monographs and miscellanies as well as book reviews. It complements and can be simultaneously searched with the International Medieval Bibliography (IMB).

The International Bibliography of Humanism and the Renaissance (IBHR) a multi-disciplinary bibliography of the Renaissance and the early modern period (1500-1700) which includes monographs, critical editions, translations, anthologies, miscellanies and exhibition catalogues to specialized dictionaries and encyclopedias, handbooks, journal articles and reviews written in any language and presented in any format. It is a continuation of the Bibliographie internationale de l’Humanisme et de la Renaissance, coordinated and published by Librairie Droz since 1965.

Patrologia Orientalis is a collection of patristic texts from the Christian East, including works, recorded in non-Latin languages, that come from geographical, cultural, or religious contexts somehow linked to Rome or the Eastern Roman Empire. The Dictionary of Medieval Latin for British Sources (DMLBS) is the online version of the most comprehensive dictionary of Medieval Latin produced and the first ever to focus on British Medieval Latin. It is an addition to the Database of Latin Dictionaries (DLB) to which the Library already subscribes.

The Aristoteles Latinus Database (ALD) is the complete corpus of medieval translations of the works of Aristotle and the last addition is the Library of Latin Texts – Ser B. (LLT-B) supplements the LLT-A.  The objective of LLT- B is to put a large number of Latin texts into electronic form, at a rapid pace, in order to meet the needs of students and researchers. LLT-A, LLT-B, and Patrologia Orientalis can all be simultaneously searched with the Cross Database SearchTool.

You can view all available Brepols databases from the BREPOLiS portal. The Library’s new discovery tool – Start your search – can bring together content of interest to those working in the Romance languages. Resources like MLA, Historical Abstracts, Arts & Humanities Citation Index, Project Muse, JSTOR, FRANCIS, Cairn.info, Torrossa as well as open access journal collections such as Persée, RACO, SciELO, etc. are all included. However, it is not a substitute for powerful discipline-specific article databases but facilitates cross-database searching in ways that OskiCat and Melvyl cannot. Read more about the benefits and limitations of this new search tool here.

J.J. Grandville’s Metamorphoses du jour.
French caricaturist Jean-Jacques Grandville (103-1847) would have celebrated his 211th birthday last week. Thanks to sturdy books and meticulous digitization, his fantastical illustrations live on for generations to enjoy. The Library acquired, also last week, an 1869 edition of Métamorphoses du jour (1869) – a publication which established his fame in 1828-29. The work is comprised of a series of seventy hand-coloured lithographs in which individuals with the bodies of men and faces of animals play out a human comedy. It will be shelved in the Bancroft with other visual masterpieces of Grandvilles’ such as Scènes de la vie privée et publique des animaux (1842) and Les fleurs animées (1847).
In HathiTrust, you can find digital surrogates of varying quality of most of the books he illustrated including:
Fables de La Fontaine (1838)
http://hdl.handle.net/2027/ucm.5324229918
Scènes de la vie privée et publique des animaux (1842)
http://hdl.handle.net/2027/gri.ark:/13960/t50g69j43
Un autre monde; transformations, visions, incarnations … et autres choses (1844)
http://hdl.handle.net/2027/gri.ark:/13960/t11p0qb89
vie privee
http://oskicat.berkeley.edu/record=b16205693~S1
fleurs animees
http://oskicat.berkeley.edu/record=b11331480~S6

French caricaturist Jean-Jacques Grandville (103-1847) would have celebrated his 211th birthday last week. Thanks to sturdy books and meticulous digitization, his fantastical illustrations live on for generations to enjoy. The Library acquired, also last week, an 1869 edition of Métamorphoses du jour (1869) which established his fame worldwide in 1828-29. The work is comprised of a series of seventy hand-colored lithographs in which individuals with the bodies of men and faces of animals play out a human comedy of Parisian life. It will be shelved in The Bancroft Library with other visual masterpieces of Grandville such as Scènes de la vie privée et publique des animaux (1842) and Les fleurs animées (1847).

This new database from ARTFL is a fully-searchable corpus of all of Voltaire’s writings. Included in Tout Voltaire are all of his works apart from his correspondence, which can be searched separately, as part of the subscription-based Electronic Enlightenment. This research tool is made available free of charge by the Voltaire Foundation (University of Oxford) and the ARTFL Project (University of Chicago).

With some year-end funds and a substantial discount through our membership in CIFNAL, the Collaborative Initiative for French Language Collections, the Library was able to permanently acquire access to the Corpus Montaigne – our third database from Garnier Classiques Numérique. This digital corpus contains all the works published in Montaigne’s lifetime and after his death by his “daughter-in-law” Marie de Gournay, all the editions published from the 16th to the 20th century, their annotation and critical apparatus, and also the best editions of the complete works in Italian, English, German and Spanish.

A more detailed description of the Grand Corpus in French is available in French and in English on the Classiques Garnier Numérique web site. 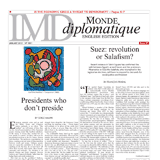 The Library recently began a subscription to the online archives of Le Monde diplomatique – a monthly newspaper offering analysis and opinion on politics, culture, and current affairs. Based in Paris and founded in 1954 under the umbrella of the French daily newspaper Le Monde, it soon acquired an international reputation for its incisive monthly articles. In 1996 it won editorial and financial independence by forming its own company.

The online archives provide quick and easy access to all articles published in the original French edition back to the first issue in 1954 and to the English edition back to 1996. While  there is a moving wall of approximately 6 months limiting full access to current content, the Library continues its print subscription which can be found in the Newspaper/Microforms collection in room 40 on the bottom floor of Doe Library. Le Monde diplomatique, originally published in French, has more than 72 editions in 26 different languages. In the Heyns Reading Room on the second floor of Doe, current print editions for the Argentinian,  Peruvian, and Venezuelan editions can be also be found in the Folio section.

One of the most noteworthy acquisitions that the Library made in the past month is to upgrade its subscription to ProQuest’s Dissertations & Theses (PQDT). The Library’s previously subscribed to just the historical index with abstracts and full text to UC dissertations. Now, users on campus, or off-campus with UC Berkeley access privileges, have access to the full text of most dissertations added since 1997.

PQDT is the world’s most comprehensive collection of dissertations and theses from around the world, spanning from 1861 to the present day. More than 70,000 new full text dissertations and theses are added to the database each year through dissertations publishing partnerships with 700 leading academic institutions worldwide and collaborative retrospective digitization of dissertations through UMI’s Digital Archiving and Access Program. While a handful of UC schools are in the early stages of archiving their ETDs, or electronic theses and dissertations, in institutional repositories using tools like the eScholarship interface and the Merritt Preservation Repository. ProQuest’s database remains the digital dissertations archive for the Library of Congress and the database of record for graduate research in North America.

For more extensive coverage of doctoral dissertations and theses from Western Europe, here are a few other resources to consult:

The Digital Scriptorium is a contribuitive image and cataloging database that unites the medieval and Renaissance manuscript holdings of a growing number of American libraries. It began in 1997 with a grant from the Mellon Foundation and the combined resources of Berkeley and Columbia; present membership includes thirty institutions with over 5000 manuscripts and 27,000 images, all freely available on the web. Member institutions include the Huntington Library, New York Public Library, the Houghton Library at Harvard, and the Ransom Center at the University of Texas. During its six-year tenure as host to the Digital Scriptorium, Columbia also contributed to the database’s increasing strength. Berkeley libraries that have digitized some of their manuscripts for the DS include the Bancroft Library, the Robbins Collection, and the Hargrove Music Library.

DS aficionados will notice that there are more records, more images, and cleaner descriptions: there’s been lots of editing by lots of partners in the years since the last refreshing of the web site. New partners, too! The Lilly Library of Indiana University, the University of Vermont, General Theological Seminary of New York, the Walters Art Museum, all have begun to add records and images; and DS has its first overseas member – the American Academy in Rome. The coming year will see the first presence of descriptions and images from the Beinecke Library of Yale University and possibly other new partners.