Ezra Sato is an Art Practice major at the University of California Berkeley. His visual and written work is often experimental and emerges from a desire to play— of wanting to entertain himself throughout the process and to engage with his prospective audience. While he has been drawing from a young age, he started taking it seriously as a practice in high school and has continually worked to maintain that skill.

Two of Ezra’s prints, I MET A GHOST WALKING BACK FROM THE FOG and (Cross-section), have been added to the Graphic Arts Loan Collection, and are available to students at UC Berkeley to borrow. Below are some thoughts on the prints from Ezra. 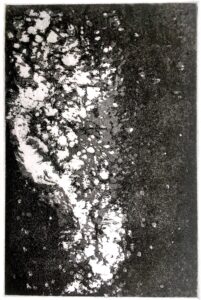 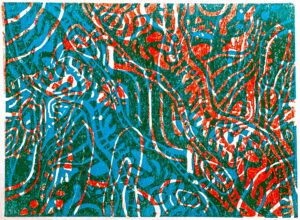 I don’t know that I have much to say about these two prints beyond the fact that I enjoyed producing them and that I hope they can be similarly pleasurable to observe and sit with. The joy of making art, for me, is often in the revisions— when I’m able to hone in on some detail or apply a method that’ll make the image “complete.” Something that I love about the process is that there is a record of the image as it was being worked through in the form of test prints and prior editions. While those artifacts of the process are not available here, please consider what they might be and play around.

Madison Nelson is a 2020 graduate from the Department of Art Practice at UC Berkeley. She grew up around horses, and as a result, horses have inspired her from a young age. In her work, Madison aims to capture reality in its purest form through highly rendered, representational drawings. Whereas oil and acrylic paint on canvas informed her work in the past, more recently she has refined her practice to drawing mediums, such as graphite and ballpoint pen, as well as intaglio printmaking. This printmaking technique appeals to her because it requires the artist to patiently plan an entire piece in advance before embracing the many unpredictable outcomes involved in the printing process. Most of Madison’s work is based on photographs she takes, as she believes photography is as close to objective reality as you can get. The translation process from photo to drawing/print then creates an environment in which her viewers can see what she sees, in turn bringing light to parts of reality that are often overlooked.

Two of Madison’s prints have been added to the Graphic Arts Loan Collection, and are available to students at UC Berkeley to borrow. Below are some thoughts on the prints from Madison. In my two prints, I used subject matter that I am very passionate about: horses and cars. I felt that the Intaglio printmaking process was especially well fit for the image of my personal vehicle because of how much work and planning it took to achieve the final image. Since before I can remember, I had always wanted to own a mustang. With a lot of financial planning and hard work throughout college, I was able to purchase one on my twenty-first birthday. I wanted to commemorate my dedication to achieving that dream with a print of the car. The process and planning it took to reach the final print quite closely mirrors my path to purchasing the real car; for that, this piece holds a special place in my heart and is a reminder to myself that you can do anything you truly put your mind to.

The horse print started out more as an experiment, and having ridden horses for fifteen years of my life, they provided me with a familiar subject that I could comfortably experiment with through a new technique. I put an aquatint on the plate and submerged it in the acid for a full twenty minutes, thereby creating a black print that I then scraped away to reveal the image. This was quite challenging at first because it is difficult to gauge how much pressure is needed to take away the desired amount of the etched surface. Although I am pleased with the final product, I learned how little pressure it takes to achieve more mid-range shades and would go lighter handed the next time I used this method.

Two of Alexandra’s prints have been added to the Graphic Arts Loan Collection, and are available to students at UC Berkeley to borrow. Below are some thoughts on the prints from Alexandra.