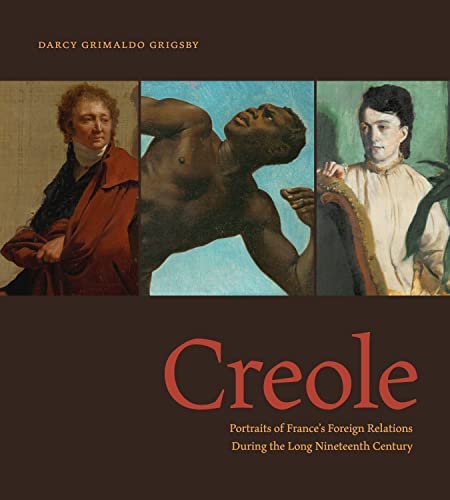 This book addresses the unique and profound indeterminacy of “Creole,” a label applied to white, black, and mixed-race persons born in French colonies during the nineteenth century.

“Creole” implies that the geography of one’s birth determines identity in ways that supersede race, language, nation, and social status. Paradoxically, the very capaciousness of the term engendered a perpetual search for visual signs of racial difference as well as a pretense to blindness about the intermingling of races in Creole society. Darcy Grimaldo Grigsby reconstructs the search for visual signs of racial difference among people whose genealogies were often repressed. She explores French representations of Creole subjects and representations by Creole artists in France, the Caribbean, and the Americas. To do justice to the complexity of Creole identity, Grigsby interrogates the myriad ways in which people defined themselves in relation to others. With close attention to the differences between Afro-Creole and Euro-Creole cultures and persons, Grigsby examines figures such as Théodore Chassériau, Guillaume Guillon-Lethière, Alexandre Dumas père, Édouard Manet, Edgar Degas, the models Joseph and Laure, Josephine Bonaparte, Jeanne Duval, and Adah Isaacs Menken.

Based on extensive archival research, Creole is an original and important examination of colonial identity. This essential study will be welcomed by specialists in nineteenth-century art history, French cultural history, the history of race, and transatlantic history more generally.

Darcy Grimaldo Grigsby is Richard and Rhoda Goldman Distinguished Professor in the Arts and Humanities at the University of California, Berkeley. She is the author of Enduring Truths: Sojourner’s Shadows and Substance; Colossal: Engineering the Suez Canal, Statue of Liberty, Eiffel Tower, and Panama Canal; and Extremities: Painting Empire in Post-Revolutionary France.