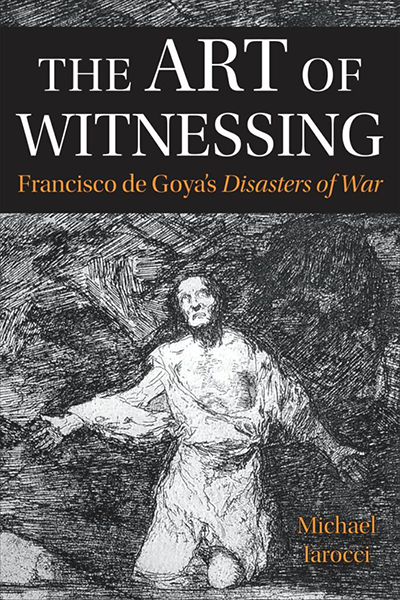 Widely acknowledged as a major turning point in the history of visual depictions of war, Francisco de Goya’s renowned print series The Disasters of War remains a touchstone for serious engagement with the violence of war and the questions raised by its artistic representation.

The Art of Witnessing: Francisco de Goya’s Disasters of War provides a new account of Goya’s print series by taking readers through the forty-seven prints he dedicated to the violence of war. Drawing on facets of Goya’s artistry rarely considered together before, the book challenges the notion that documentary realism and historical testimony were his primary aims. Michael Iarocci argues that while the depiction of war’s atrocities was central to Goya’s project, the lasting power of the print series stems from the artist’s complex moral and aesthetic meditations on the subject.

Making novel contributions to longstanding debates about historical memory, testimony, and the representation of violence, The Art of Witnessing tells a new story, print by print, to highlight the ways in which Goya’s masterpiece extends far beyond conventional understandings of visual testimony.

Michael Iarocci is professor of Modern Spanish Literature and Culture (18th-21st centuries) in the Department of Spanish & Portuguese and the Associate Dean of Arts and Humanities at UC Berkeley. He received his Ph.D. from the University of Pennsylvania. Comparative and Transatlantic Hispanic Studies. Literature and geopolitics. Aesthetics and ideology. Visual culture. His previous books include Enrique Gil y la genalogía de la lírica moderna (Juan de la Cuesta, 1999), and Properties of Modernity: Romantic Spain, Modern Europe and the Legacies of Empire (Vanderbilt University Press, 2006).