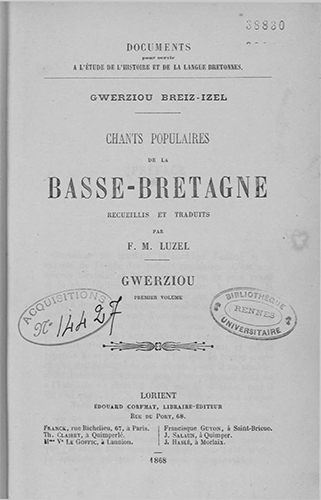 “Where were the wizards and witches,
for they are are the ones who taught me how to spoil the wheat.”

François-Marie Luzel (1821-1895) was a French folklorist and Breton-language poet who assumed a rigorous approach to documenting the Breton oral tradition. After publishing a book which included some of his own poetry in 1865 entitled Bepred Breizad (Always Breton), he published a selection of the texts that he collected in the two-volume set Chants et chansons populaires de la Basse-Bretagne (Melodies and Songs from Low-Brittany) in 1868. It is this latter work that is featured here and offers a parallel translation in French with the intent of making the corpus of songs available to as wide a readership as possible. Throughout the 19th century, Celtic revivalists such as the controversial Théodore Hersart de la Villemarqué undertook an equally ambitious project to collect, preserve, and disseminate folk songs and stories. According to Stephen May, “The modern Breton nationalist movement draws heavily on the persistence of Breton traditions, myths memories and symbols (including language) which have survived in various forms, throughout the period of French domination since 1532.”[1]

Of the many minority languages spoken in France today, Breton (Brezhoneg) is the only one of the Celtic branch of the Indo-European family. Its history can be traced to the Brythonic or Brittonic language community that once extended from Great Britain to Armorica (present-day Brittany) and as far as northwestern Spain beginning in the 9th century. It was the language of the upper classes until the 12th century, after which it became the language of commoners in Lower Brittany as the nobility adopted French. Because of the predilection for French and Latin in the early modern and modern periods, there exists a limited tradition of Breton literature. After the revolution of 1789 when French became the official language, regional languages and dialects became viewed as anti-democratic and hence prohibited in commercial and workplace communications. The Loi Deixonne of 1951 opened the doors grudgingly for the teaching of Breton in France together with Basque, Catalan and Occitan. There has since been some expansion to roughly 5% of the school population.[2] Despite a flowering of literary production since the 1940s, Breton has been classified as “severely endangered” with approximately 250,000 native speakers.[3] Since 1911, Breton has been a core language taught in UC Berkeley’s Celtic Studies program, the oldest of its kind in the country.[4]