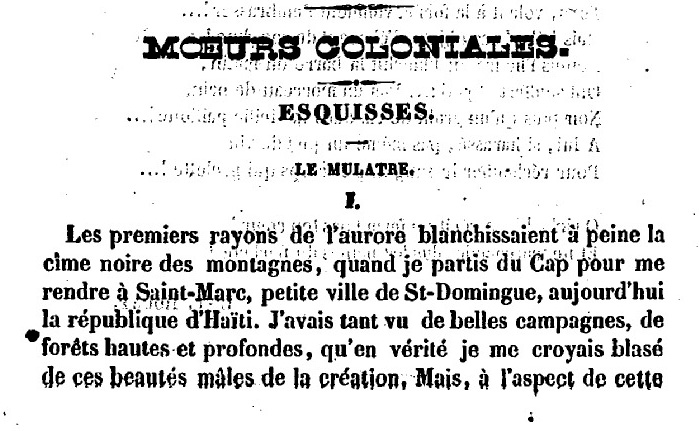 Born in New Orleans, Victor Séjour (1817-1874) was a Creole writer who moved to France at the age of 19 to continue his education, find work, and flee the racial oppression of Louisiana. His short story “Le Mulâtre” (“The Mulatto”) was first published in the abolitionist journal Révue des Colonies (March 1837) not long after his arrival in Paris and is now freely available through Gallica—the digital library of the Bibliothèque nationale de France. It is the first work of fiction written by an African American author. Set in Saint Domingue before the Haitian Revolution, Séjour’s work centers on the injustice and cruelty of slavery. According to Marlene Daut and David O’Connell in her article “Sons of White Fathers: Mulatto Vengeance and the Haitian Revolution in Victor Séjour’s ‘The Mulatto'” published in Nineteenth-Century Literature 65:1 (June 2010), the tale was “not simply a blow . . . struck for the cause of abolition in the French colonies, but [was] . . . also one of the first manifestations of a ‘literature of combat’ written by an American black.””

A full English translation of “The Mulatto” was published more than one hundred years after his death in The Norton Anthology of African American Literature, edited by Henry Louis Gates Jr. and Nellie Y. McKay (New York: W. W. Norton and Co., 1997). Remembered as one of the first black writers of both the African American and French literary traditions, Victor Séjour enjoyed a period of success as a playwright, was naturalized as a French citizen, and is buried in the Père-Lachaise Cemetery in Paris. The Library has reprints in French and a few English translations of his works in the Main Stacks while The Bancroft Library houses two rare first editions – La madone des roses : drame en cinq actes, en prose (1869) and La tireuse de cartes; drame en cinq actes et un prologue, en prose (1860) in its African American Writers collection.

This post has been shared as part of a UC Berkeley initiative announced by Chancellor Carol Christ to mark the 400th anniversary of the forced arrival of enslaved Africans in the English colonies.