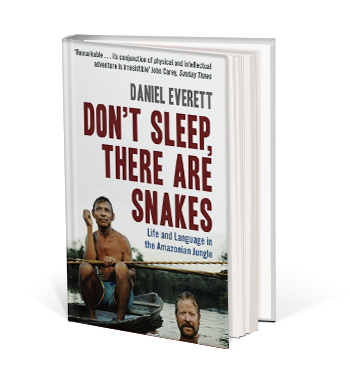 Don’t Sleep, There are Snakes: Life and Language in the Amazonian Jungle
Daniel Everett

His original goal was to learn the Piraha language to translate the Bible in order to convert them; however, by the end of his long sojourn in the Amazon, Daniel Everett found himself not only with a new understanding of language but also with a different view of life and spirituality which, ultimately, brought him to abandon his faith.

The book has three different currents running through it and mixing through the pages. It’s a memoir describing the events in the author’s life–his struggles both practical, due to living in minimalist environment with his family, but also, increasingly as time goes by, emotional and spiritual as he starts to question beliefs he had long held. It’s an anthropological study reporting the habits, beliefs, and culture of a isolated, very small community of natives in the Amazon. And it’s a study on a language that defies the linguistic theories that Everett knew and which put him on a collision course with his MIT colleague Noam Chomsky.