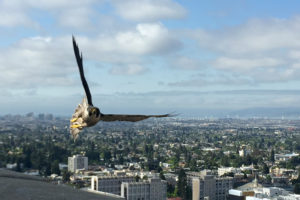 Here at Berkeley it feels a lot like we skipped spring this year entirely, moving quickly from a cold and wet winter to gloriously warm and sunny days. Unlike much of the campus, the Oral History Center doesn’t exactly shut down during the summer, but we do switch gears a bit.

In recent years we’ve come to rely increasingly on the workplace contributions of our amazing student employees. In fact, over the past year, we’ve benefited from the hard work of eighteen Berkeley students. They’ve worked on a variety of projects and tasks, from creating metadata for oral history video now streaming online to drafting tables of contents for our transcripts, plus a whole lot more. With this particular change of seasons, we sadly say goodbye to a number of excellent students — while also congratulating them on graduating! —  including Maggie Deng, Cindy Jin, Carla Palassian, and Marisa Uribe.

Summer also typically means travel for those working at the university. Travel, as it turns out, has become a regular feature of life year-round at the Oral History Center in recent years. Our Getty Trust oral history project has had several interviewers traveling to New York and Los Angeles to do their work, the Chicano/a Studies project has sent us to various in the West and Southwest, and our oral history with former California Governor Jerry Brown means regular overnight trips to his ranch outside of Williams, California, for some pretty intense interview sessions. Oral history at Berkeley is no longer just a local or, even regional, affair. We follow our research to where the good, important, and impactful stories are located, no matter what the season.

Thinking about the change of seasons also reminds me of that moving passage from the Book of Ecclesiastes, brought into popular culture in the 1960s by the Byrds in their song “Turn Turn Turn”: “To everything there is a season, and a time to every purpose under heaven.” I think of this now, a day after the passing Herb Sandler, a narrator I worked with very closely over the past three years on his lengthy life history interview, and a broader project that resulted in another 18 interviews. Herb was a giant in whatever work he pursued. He was always deeply involved, passionately motivated, prophet-like in his indignations, compassionate beyond reason, and never ever considered retirement as an option. I join the chorus of those who express sadness at seeing him leave us, and I am grateful to have had the opportunity to work with him to document his life’s work.

Compared to many institutions, the university remains closely tied to the seasons. And while the staff of the Oral History Center doesn’t follow the academic calendar as would an academic department, we are deeply affected by the seasons and by the cycles of life — by the arrival and departure of our student employees, by the beginning of an oral history and by the passing of a respected narrator. As I type this, looking over me from 20 stories up are Carson and Cade, two peregrine falcon chicks whose lives, up until this week, were lived on a precipice of Sather Tower. Now, they are in flight, beginning to explore the world around them.