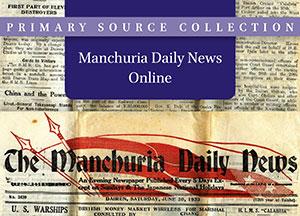 The Library has recently acquired the digital archive of the Manchurian Daily News and associated publications Manchuria Magazine, Manchuria Month, Contemporary Manchuria, and the Manchurian Information Bulletin. As described on the Brill website, this resource “offers scholars of Japan’s modern history an unparalleled inside view of Japan’s agenda in Manchuria and its plans for domination in Asia. Founded in 1908 in the wake of Japan’s victory in the war against Russia, the Manchuria Daily News set up in Dalian (Darien) at the headquarters of the South Manchuria Railway Company (Minami Manshū Tetsudō Kabushiki-gaisha) (SMR).
“Lavishly funded from Tokyo, and with the full resources of the SMR Research Department behind them, the Manchuria Daily News and the associated titles offered here constitute a formidable record of Japanese policy on Manchuria and the Manchoukuo project. From 1908-1940 this compact, feisty daily and its associated titles responded to the exigencies of the day, taking requests from a variety of official and often competing propaganda bureaux. In the Manchuria Daily News and in these associated publications, the SMR presented a powerful case for the Japanese leadership of Asia, after 1932 using Manchoukuo as a showcase for Japan’s technological, cultural and political advancement.”