I was recently thinking about the Nicaraguan poet Rubén Darío and his poetry. As I was pondering over our library’s holdings of his books, I realized that we had over 200 of titles that were authored by him. The oldest circulating item was published in 1902 in Paris by Garnier hermanos, an its title is “La Caravana Pasa.”

And there are several other titles that are equally interesting like a 1904 Madrid edition that is entitled, “Tierras solares,” and others.

Why do I write this? I write this because recently, I purchased for our library the following book that is a box with also facsimiles of Rubén Darío’s poetry. Due to its very interesting materiality and artefactual value, I thought that it was a good idea to ask my colleagues in Bancroft Library to house it. And, they did! 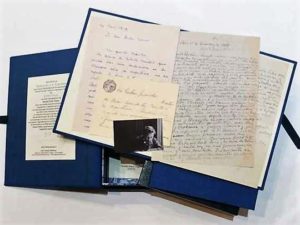 Here is some more information about the book.